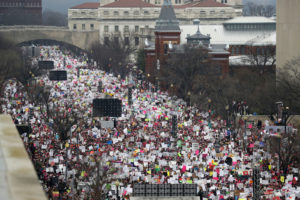 On 21st January 2017, as part of their ‘Belief and Beyond Belief Festival,’ the Southbank Centre organised a weekend of talks and discussions titled ‘The Search for the Meaning of Life’.

At a couple of the sessions, though worded differently, a common question was asked by several participants. Boiled down, it went like this, ‘Can we have morality and values without religion? Isn’t there a threat of nihilism if people aren’t ‘stitched’ to values by having to follow religion?” (A true nihilist is often defined as someone who believes in nothing, has no loyalties, ‘…and no purpose other than, perhaps, an impulse to destroy.’ (Internet Encyclopaedia of Philosophy))

Fresh in our minds, was the previous day’s inauguration of a man who may not be described as a nihilist, because he certainly believes in money and his desires: that he has a right to ‘grab’ whatever he wants, and do whatever he wants, irrespective of the needs of others and civilized relationships with the world. A man who is running America as an extension of himself. And one who makes a public show of piously attending church.

On that Saturday, as we were gathered at the Southbank, elsewhere, a wave had begun to rise, and grow and roar. Women’s marches were exploding across the globe. Women, as well as men and children, of every colour, creed and no-creed, had taken to the streets of cities across the world. Protesting against Donald Trump and his policies, defending the morals and values they believed in.

If millions of women, and men and children, from Washington to Nairobi, from London to Adelaide, from Prague to Paris, came together to defend a certain set of morals and values, the question, whether religion is needed to provide morals and values, was clearly answered. The marchers hailed from every sort of background and diversity. Some will have been religious, believing in their particular God, some will have been atheist, and some agnostic. Yet, they marched together for values and morals they believed in.

All through history, and on our screens everyday, we see how religion has been used to justify the most horrendous barbarism. From the cruelties of the inquisition to the slavery of Yazidi women. In their essence, all religions teach people to do good and not harm, but the purveyors of religion all too easily twist it to their ends.

Although I have spiritual beliefs, it’s my firm view that morals and values stand independently, on their own worth. And demand the individual exercise their conscience. Think, determine and decide for themselves about what’s right and wrong. So they can’t be hi-jacked by those using religion for their own power, or politicians using people for their own power.

There are morals and values which exist both in religion and in human thought. When the Dalai Lama says ‘My religion is kindness,’ he’s expressing a way of life, which can be exercised in a religious or secular manner. It’s not the label you put on it, that’s important, but the moral of it. The phrase, ‘Do unto others, as you would have them do unto you,’ is positing a moral way of living, without recourse to any particular religion.

The religious carrot and stick approach to enforcing morals and values has never sat well with me: the ‘You’ll get rewarded in heaven if you help others,’ or the ‘You’ll burn in hell if you don’t obey.’ This reward and punishment regime suffocates our conscience, diminishes our humanity and intelligence, makes us into weaker individuals and citizens. Engendering weaker societies and authoritarian governments.

I define morals and values, as those ideas which are positive for people and can be universally applied,  embedded in justice, people’s rights and dignity. Ideas that are good in themselves, because they provide  fair and nurturing environments. And which do not advocate or justify harm to anyone. Ideas that are open to refinement through discussion and debate, progress and creativity.

Over four million women, men and children, in over a hundred cities across the world, marched on  January 21st .  Their call to action didn’t come from any pulpit and their united passion wasn’t dependent on any particular God.

Morals and values exist on their own merit. They’re an expression of our humanity, that profound dialogue with ourselves and the world. Which demands we examine ourselves, judge what’s right and wrong for ourselves, without harming anyone. It’s this exercise of ethics and conscience which transcends every difference and confers value upon us. A sense of justice and rightness, as sacred as our sense of beauty and truth.