“Bombs and pistols do not make a revolution. The sword of revolution is sharpened on the whetting-stone of ideas.”(Bhagat Singh)

As Jamal Khashoggi’s body, or its dismembered parts, remain to be discovered, and Raif Badawi continues to be incarcerated with the threat of 950 lashes still hanging over him (the first 50 were inflicted in January 2015), I wanted to have a look at what these men had actually written to make them the target of such barbaric punishment by the Saudi Arabian authorities. 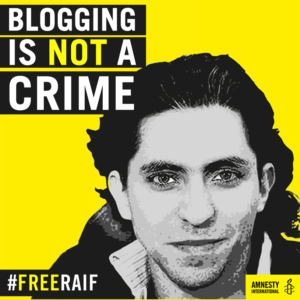 Had they advocated armed insurrection? Had they incited violence against the person of the ruler?

No. They’d merely traded in words – words and progressive ideas.

And there we have it! No bombs or gun blasts needed. What has toppled empires? What rocks a powerful country on its axis? Words and ideas.

“The pen is mightier than the sword,” is a well known phrase, yet most of us rarely give it credence. Perhaps we should. Given that the Kingdom of Saudi Arabia sentences a blogger to  savage punishment and sends a 15-man hit squad armed with weapons and a bone-saw to silence a journalist.

Autocratic authority refuses to be accountable and often goes hand-in-hand with strict religious orthodoxy. Both propping each other up, both justifying each other. A vicious circle creating a culture of intimidation and silence. We’ve seen versions of it before, as recently as colonialism and slavery.

The ‘Thought Police,’ don’t just live in the pages of George Orwell’s 1984 novel but wage a war against words and ideas in the land of Crown Prince Mohammed bin Salman. In his book 1000 Lashes, Because I Say What I Think, Raif Badawi writes: “The Arab societies are programmed to consider any freethinking idea to be a moral degradation. They consider it to be an act against religion and a departure from the righteous road.” In another blog he writes “Liberalism is seen through this poisonous filter that was placed upon the minds of our society: it’s seen as blasphemy, disbelief, immorality – naked beaches and gay marriage.”

Jamal Khashoggi was no dissident as his daughters have written, but a Saudi patriot who wanted free expression and reform in his country.

In a September 2017 article about the arrests of over 30 people, Khashoggi echoes Raif in describing the  dehumanisation of those who speak out : “…the public shaming of intellectuals and religious leaders who dare to express opinions contrary to those of my country’s leadership. …” As well as the leadership’s practice of  “encouraging citizens to name others to a government blacklist. Those arrested were on that list.” He ends the article with the words “We Saudis deserve better.”    A direct challenge to the ‘Thought Police.

In his blog, The Day of the Nation Badawi puts forward civilisational values when he writes: “One of the most honorable bases for a united nation is that it shouldn’t be built upon the specifics of one person, or one line of thought, or one group, excluding everyone else.” Hardly an idea which would find favour with a religious, monarchical ruler, whose word is law.

Khashoggi lambasts the hypocrisy of Saudi officials who castigate Islamists. He contends that Saudi Arabia is the mother of all political Islam pointing out that it describes itself as an Islamic state in its  “Higher Law,” thus avoiding the term constitution and often saying that the Koran is the constitution.

Written in a half-comedic, half-tragic style, Badawi’s blog A Male Escort for Every Female Scholar, narrates how women scholars, studying in Britain, were given eight weeks to prove a male companion accompanies each of them. Raif condemns this demand as a “real and serious disparagement of women’s rights.” One female student was banned from finishing her studies in the UK and, “was shipped on the first airplane to Saudi Arabia when she couldn’t come up with a male escort.”

Strict societies, whether religious, political, or both, always harbour shed-loads of skeletons in their cupboards (e.g. the plethora of sex abuse scandals in the Catholic Church). Badawi’s blog, “The Traveler’s Marriage and the Borrowed Ram,” reveal abusive sexual practices. In The ‘Traveler’s Marriage’, the marriage is witnessed and attended by the woman’s guardian. The woman is consenting but has given up all her rights to financial support, even if she has a child, as well as her right to housing and the “religious right to equal treatment” with the man’s other wives. “She has to accept that her role is for the man to visit her chambers, whenever he likes… The man is protected by religion and a binding legal contract.” One can’t help but wonder what dire straits a woman would have to be in, or what kind of coercion has been used on her, for her to consent to being so humiliated and abused. The ‘Borrowed Ram’ marriage, termed as ‘another animalistic marriage’ by Raif, is one where a divorced woman who wants to re-marry her husband, has to sleep with another man (intercourse is mandatory), divorce him and only then be able to re-marry the first husband. “… we build our own handcuffs that trap and harm us. … We tell the lie and we believe it. We create a marriage contract, and then consider it permissible. …The names of marriage contracts are many, but death and obscenity remain one.” 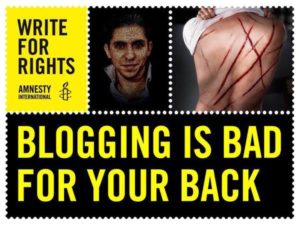 In the blog Let’s Lash Some Astronomers, Raif, whose style is often ironic or satirical, expresses profound admiration for a science he says he’s only recently learnt about: Sharia Astronomy. An Islamic preacher had demanded that astronomers face the consequences of their actions, as “they are faulting the sharia vision.” Raif calls upon NASA to immediately abandon its telescopes and send scientists to study ‘real science’ with these preachers.

Conservative Islamic scholars, and Saudi sharia scholars in particular, make literal interpretations of passages in the Quran, believing the earth to be flat, heaven arranged in multiple levels, and that the sun revolves around the earth.

Unknowingly foreshadowing his own barbaric sentence of a 1000 lashes, Raif asks “We…sentence those who drink to eighty lashes. I wonder how many lashes those astronomers deserve…”

Highly controlled societies may claim to occupy the moral high ground, but corruption and hypocrisy run rife below the surface; Saudi Arabia being no exception. No-one likes to be exposed, particularly authoritarian and religious regimes where the powerful aren’t subject to investigation, balances and checks. KSA could do with a Mueller; unfortunately, he’d probably be detained, tortured and murdered, before he could even begin his work. Khashoggi lists the twitter page https://twitter.com/m3takl_en which catalogues prisoners of conscience in KSA and reports cases such as the one about a journalist imprisoned for one tweet, criticising the situation of sport in KSA; as well the case of the lawyer who claimed “Saudi authorities and public prosecution are violating the Law of Criminal Procedures in various ways; they tortured prisoners, arrested women, sick and old people; no one today is safe from detention.”

A chilling phrase: “no one today is safe from detention.”

In a November 2017 article, “Saudi Arabia’s crown prince is acting like Putin” Khashoggi has a go at corruption and the waste of oil wealth. Describing corruption in KSA as being of a different order entirely from corruption in other places, where a bribe or an expensive gift suffice to ease the path towards a contract;  corruption in KSA has made senior officials and princes into billionaires. Contracts are either inflated or a complete fantasy. A massive sewer project in Jeddah turned out to be merely manhole covers across the city without any actual pipes. He admits even though he was the editor of a major paper at the time, he and other editors knew about this, but no-one reported on it. Such was the fearful and menacing atmosphere. And continues to be. His own terrible murder testifying to it.

Another example of unbridled corruption was the building of an airport, in a bizarrely out-of-the-way location, simply to enrich the princely owners of the land. The princes had received the land as a gift from the government. And then were paid extravagant compensation for the use of the land.

In an interview in 2016 Mohammed bin Salman himself revealed that about a quarter of the entire Saudi budget, during the oil boom years from 2010 to 2014, had been ‘inefficiently spent.’  Khashoggi doesn’t sweeten his response: “Inefficient spending” is a far too gentle description for corruption in Saudi Arabia. So yes, I, as a Saudi citizen, am eager to see this scourge end.”

Khashoggi shockingly reveals that only 40 percent of Saudis are able to own their own home, because of the monopolization of land by the royals, and asserts that Saudi Arabia is no longer a wealthy country largely due to gross mismanagement of our rather formidable petro-wealth. Likening the royals to the greedy couple who killed the goose that laid the golden eggs.

A truth-telling hardly likely to endear him to the powers-to-be in Riyadh. Or one power in particular. Comparing Mohammed bin Salman to Putin, for his insistence on complete loyalty accompanied by a significant “or else” …  he notes Mohammed bin Salman’s famous purchase of a $500 million yacht in 2015 amid avid rumours of other extravagances. Khashoggi calls on the Saudi media to become proactive in supporting impartial and transparent investigations into corruption cases, ending with the words no authoritarian leader will tolerate: “We are a kingdom of silence no longer.” And wrote these prescient words:  “Writers like me, whose criticism is offered respectfully, seem to be considered more dangerous than the more strident Saudi opposition based in London.” 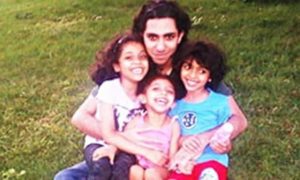 Both Raif Badawi and Jamal Khashoggi convey a deep love for their country and the progressive values of freedom of speech, human dignity and good governance.

Words and ideas. Raif sets out the truth: “Any religion-based state has a mission to limit the minds of its people, to fight the developments of history and logic, and to dumb down its citizens.”

Jamal Khashoggi doesn’t hesitate to write honestly about himself either: “It was painful for me several years ago when several friends were arrested. I said nothing. I didn’t want to lose my job or my freedom. I worried about my family.

I have made a different choice now. I have left my home, my family and my job, and I am raising my voice. To do otherwise would betray those who languish in prison. I can speak when so many cannot.”

Khashoggi may have been brutally murdered but his words and ideas have now circulated far beyond their original publication and gained global status. The imprisoned Raif Badawi’s words continue to exist in the world.

“By crushing individuals, they cannot kill ideas” (from one of Bhagat Singh’s jail diaries)