The Year 2020 just keeps on giving: Covid, Brexit, corruption, and a myriad other shocks to our system. So – let’s turn the dial, change the channel, and talk about the Punjabi farmers and their hazardous, determined odyssey to the capital of India.

I write as the daughter of Punjabi farmers and will focus on them, but I want to emphasise, beyond all doubt, that farmers across India have risen up against the new farm laws, which will change the way farmers sell their produce. A huge percentage of India’s farmers have small-holdings and currently rely on the mandi system and GMP (Guaranteed Minimum Price) to protect their income, giving their families stability and some security. Over 500 farmers organisations are participating.

The call came and they responded in their hundreds of thousands. Punjabi farmers on the march: men, women and children; on foot, in buses or on convoys of tractors. Joined by farmers from Haryana and many other areas of India. Embarking on a dangerous, epic journey to fight for their lands and livelihoods. Reminiscent of Martin Luther King’s March on Washington in 1963 for jobs and freedom, in which he made the famous speech ‘I Have A Dream’.

Delhi had also heard the #DilliChalo call and was getting ready to welcome them. In its own way. As Shashi Tharoor tweeted on 27thNovember. “Stadiums being converted into prisons & trenches being dug to prevent entry to the capital. In other circumstances one would think this is how we are fighting an enemy invasion. In new india, this is how we are fighting our own farmers.”

All the major roads leading to Delhi were blocked by heavy barriers, barbed wire, trucks filled with sand and deep lines of police.

The farmers refused to be deterred. Perhaps the state had forgotten these are people who’re  accustomed to dealing with obstacles: clearing the land, moving fallen tree trunks, digging out rocks, deploying their tractors or combining their muscle power. Battling jets of water cannon, tear gas and security personnel, the farmers embarked on a new kind of land-clearing, tying chains around barricades and dragging them away, or skilful tractor drivers manoeuvring away blocks and barbed wire. At one place they cleared the road of barricades, tossing them over a bridge, to allow an ambulance to  pass through.

In the cold temperatures of November, from the elderly to the young, they’ve endured lathi  charges and other attacks by the police, slept in their vehicles or on the ground. Cooked food on the roadside and distributed it, including to the police officers standing against them.

Why have these thousands of farmers left their fields and embarked on this arduous, difficult journey? The farmers are fighting for their livelihoods and the survival of their families, seeking to overturn what they call the ‘black laws’ passed by the Indian legislature in September 2020. Knowing this is going to be a long, drawn out campaign, neither do they intend to return soon:

“We have enough ration for two and a half to three months,” NDTV quoted a farmer travelling from Punjab as saying. “There is a 5,000 litre tank, gas stove, inverter, every facility you can think of. We have mattresses, quilts, enough vegetables,” he said.

The Indian Express quoted a protestor: “We have enough supplies to camp in Delhi for at least six months. We are ready to spend all winter in the capital, until the Centre listens to our legitimate demands and withdraws the farm laws.”

Women are involved in unprecedented numbers in this campaign. They form a significant proportion of the convoys heading towards towards Delhi, and Harinder Bindu, herself a full time farmer for over 30 years, is leading a monumental march of nearly 10, 000 women.

Women who live and grow up on farms, women who may be illiterate or graduates of universities, know every inch of their farms. As well as running the home, they’re accustomed to contributing their labour in whatever way they can, including working in the fields. Like all farmers, they know the seasonal rotations, the sowing and growing cycles, the harvesting and selling mechanisms.   Farming women know what’s at stake, and they’re not going to stand quietly in the background.

Harinder Bindu says: women need to raise their voices more because the kitchen, which is (still) considered their departments, will come to a “halt with this law.”

Bindu also adds that, when the effects of the laws start to bite, not only will women have to start making terrible decisions about rationing food for their families, they may also have to go out and seek work in areas where their safety may be at risk.

Bindu, along with her family and others, left her house on November 25. Three days later, she is still not in Delhi. Till the time of publishing of this article (28th November) she was still 30 km away. “They had sealed the borders, the police were beating protesters, we had to stay behind considering the safety of all the women with us,” she says.

The farming bills had been passed amid uproar and pandemonium in the Indian legislature, where opposition members had fiercely contested the bills, tearing up documents and going so far as to attempt to grab the Speaker’s microphone. These highly controversial farming bills were passed  on a voice vote, further inflaming tensions and leading to accusations of inaccuracy.

Opposition members have also called the bills the ‘black law’ and ‘pro-corporate.’ Rahul Gandhi, tweeted that Modi “is making farmers ‘slaves’ of the capitalists, which the country will never allow to succeed”. 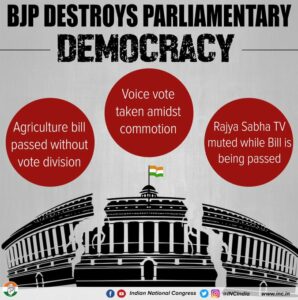 What’s the purpose of the new bills? Since 1964 it’s been compulsory for farmers to sell their produce at mostly local, government-regulated markets, called mandis. At these mandis, middle-men help farmers sell their harvests to either government companies or private ones, supported by the Guaranteed Minimum Price system. This allows the farmers to be confident their crops will generate, at the very least the minimum price. They can calculate their income and plan for the months ahead. The mandi system is favoured by the farmers, although they acknowledge it needs to be examined and reformed.

In brief, the new bills allow farmers to sell their produce directly to private buyers and companies.  Additionally, traders will be allowed to store stocks of food items; (hoarding food items in order to make a profit, was a criminal offence in India).

The change appears to be simple enough, and in some cases may even benefit farmers, so why have the country’s farmers risen up in such mutinous numbers?

Rashpinder Singh, a farmer from Punjab says: “The government has left us at the mercy of big corporations. It is preposterous to believe that farmers who have small land-holdings will have any bargaining power over private players.

Government officials have said that farmers can sell their produce to whoever they want, whenever they want. How can a small farmer store his produce for months on end? He will not have access to storage facilities. As a result, it is very likely that the produce will be sold at a rate which is unsustainable for the farmer.”

Kavitha Kuruganti, from the Alliance for Sustainable and Holistic Agriculture, points out that the bills are going to affect farmers adversely,  “…there are serious deficiencies in the way the bills have been drafted. Clearly, it’s meant for the agri-business companies and not the farmers…” 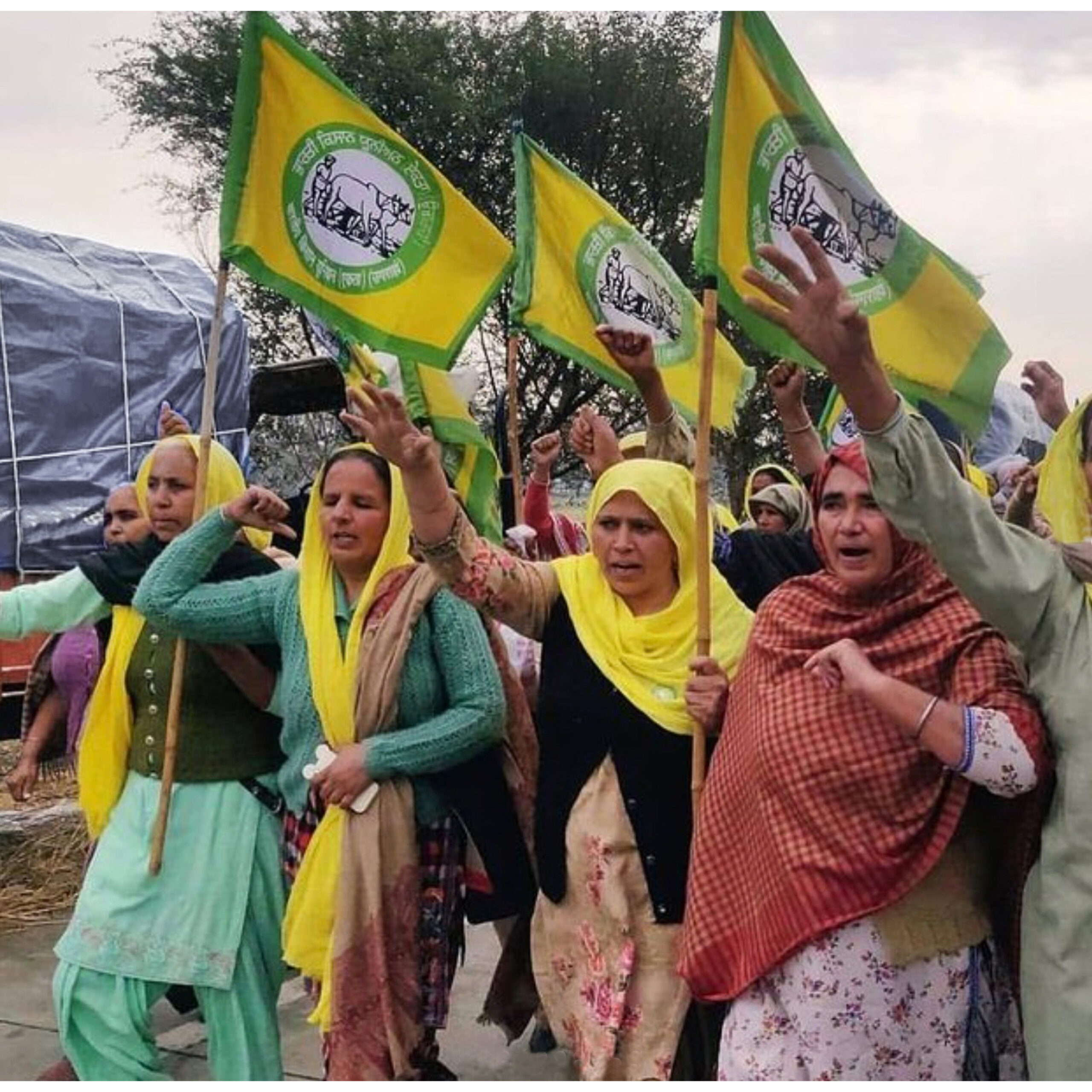 In the UK farmers complain about major supermarkets exploiting them and forcing them to accept the lowest possible prices for their produce. Similarly, agri-business companies are hardly known for their farmer-friendly policies. Corporations across the world, work on the basis of maximising profit, and justify themselves by claiming “It’s business.” As if business operates in a vacuum without social impact or responsibility.

It’s not difficult to imagine what’s going to happen to Indian farmers, if these farming bills are allowed to remain in force. Agribusiness will bargain aggressively, pushing the farmers of small-holdings into accepting the lowest prices for their crops. The farmers will gradually sink into debt, and eventually be forced to sell their land to the companies. No wonder hundreds of thousands of farmers are braving the cold, the hardship, and the water-cannon to fight these bills.