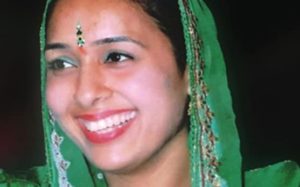 Seeta Kaur, a 33-year-old British-Asian woman, died in India on 31st March 2015. She was the mother of two sons and two daughters, all under the age of 10.

Married to Pawan Saini, Seeta was a hardworking mother and wife, running her own beauty salon in London, and a woman clearly committed to her marriage and children. She observed the rituals required of Hindu wives, such as fasting on Karva Chauth for her husband’s safety and longevity, Navratri and other occasions. As well as observing the ‘Days,’ so that on certain days of the week she only ate vegetarian food. Seeta would also often go to a Mandir or Gurdwara, the Hindu and Sikh temples.

Born in North London, with her twin sister Geeta, the parents had named them after a popular Bollywood film about twins, Seeta Aur Geeta. They had two older sisters and a brother, and the family were very close. When Seeta and Geeta started school, they hated it so much, they’d kick up an almighty fuss. The whole school would know the twins were in!

Seta’s older sister, Swinder, describes her growing up into a caring, sensitive person, who always had a soft spot for others, but was also strong and self-reliant. A bubbly personality who loved music, dancing, and having fun. Swinder remembers guiltily, she used to bully the twins. As they grew older, like most siblings, they’d play card games, tease each other, laugh and joke when they were together.

As busy wives and mothers, the sisters would cook a dish and take it round to one of the others, or go on day trips with the children. Seeta became the go-to person for style and beauty advice, often getting a panicked call from a sister about how to do ‘smoky eyes,’ or what outfit to wear for some occasion. Seeta’s sister remembers poignantly the last time the four sisters were together, was when they went to Southend-on-Sea: a wonderful day spent paddling in the sea and going on rides at the funfair.

Seeta believed you only marry once and did her best to keep her marriage going. Pawan was working in England when they got married but only received full residency status after the marriage. His family were in India, and unknown to Seeta, he had promised his older brother and sister-in-law, who didn’t have children, that he would give them his own son if he had one.

As it happened, Seeta’s first child was a son. Tremendous pressure was placed on her to give up the child, but she adamantly refused to part with him. Tensions increased in the marriage. Once, Pawan tried to strangle Seeta in front of her twin sister, who had to desperately struggle to get him to release her. Seeta was left choking for breath.

The sisters believe that Pawan began to control Seeta more and more, limiting her contact with them, and eventually stopping Geeta, her twin, from seeing her.

Seeta continued looking after her family and working all the hours she could, even while pregnant, to ensure family expenses were met. It’s believed that Pawan was sending a large portion of his earnings to India. When Seeta’s twin children were born, a girl and a boy, the demands to give up one of her sons became even more incessant, and the family believe Pawan’s aggression increased. Ravinder, the oldest sister, witnessed an attack on Seeta when visiting them: again Pawan tried to strangle Seeta and had to be forcibly pulled away. By this time Seeta did believe her marriage had ended, but at a family meeting, Seeta was persuaded to give the marriage one more chance.

In early 2015 Pawan told Seeta his mother was seriously ill and wanted to see the children. The family left for India.

On the night of March 31st Seeta’s family received a chilling phone call, telling them Seeta had died of a heart attack.

Immediately travelling to India, Seeta’s family insisted on examining her body. They found considerable bruising around her neck and upper chest: this fuelled their suspicion that she had been strangled to death. Seeta’s family stated clearly to her husband’s family their intention to take her body back to the UK. However, at some point during the night, Seeta’s body was taken out and cremated.

The already anguished family were heart-broken at being deprived of the opportunity to say the most sacred of all goodbyes, or arrange a post-mortem to establish the cause of death.

After they had returned to England, the family learned from Seeta’s neighbour, that before leaving, Seeta had given her an ominous message: if she didn’t return from India, to make sure the children were brought back.

Seeta’s grieving family are fighting to bring the children back to England, and together with Southall Black Sisters, to gain justice for Seeta with the Justice for Seeta Kaur campaign.

Seeta’s death has disturbing parallels with the deaths of Manjit Kaur, Surjit Atwal in India, and Shamia Shahid in Pakistan. The campaign demands urgent and co-ordinated action from the British and Indian authorities to ensure justice for British national women killed abroad.

Please donate to the campaign; the family is in urgent need of funds to finance legal actions in India and to gain the return of Seeta’s children: http://bit.ly/2pODNGy

Also, please sign up to the campaign, on the Justice for Seeta Kaur page to ensure practices and procedures are put in place by Indian and English authorities, because Seeta won’t be the last woman to be taken abroad – to have her life taken from her. 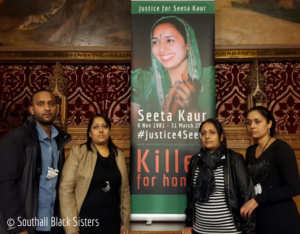