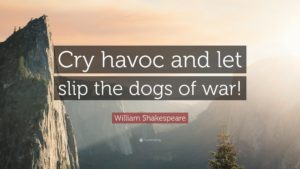 As Britain’s prime minister convenes a ‘War Cabinet’ and moves British submarines within missile range of Syria, I would like to take a moment. To talk about love, Shakespeare and Emma Rice, whose role as Artistic Director of the Globe will end this month.

I was riveted by Emma Rice’s introduction to the Globe Theatre’s ‘Summer of Love’ season 2017.  An introduction which rejects the gentrification of Shakespeare and strips away the magnolia paint he’s been covered with by centuries of genuflection.

“He gazed fearlessly into human existence like no other, before or since. Pre-Freud, pre therapy, pre-equality or civil rights – he asked the big questions. “What a piece of work is a man?”

And I say he answered the question. In horrific detail, in terrible cruelty, in suffering and sacrifice, in wisdom, wonder and love.

As we stand on the brink of catastrophe, as our ministers, Putin, Trump et al, threaten to rain hellfire upon Syria, and by extension, each other, why is it their hearts have been cleansed of wracking pain, of pity and love? Why is it they’re so full of enmity and violence? Rather than diplomacy, reason or co-operation? Is it because their lives have been built on ambition, rivalry and division? Because it’s easier to exercise power rather than principle?

So, ‘What’s love got to do with it?’ to quote the wonderful Tina Turner. Love, in all its manifestations as conflict-resolution, dialogue, collaboration, intelligence, and peaceful solutions should extend to the farthest reaches of the earth, to every political act, to every decision. What it truly means, is that we stop seeing and treating each other as enemies. The globe has become far too small for us to do that, and our ability to unleash armageddon has become far too accessible.

Love, with its thousand faces and thousand opportunities, is the road we should walk. Nothing’s impossible, if we work hard enough, if we love hard enough. There’d be no need to convene war cabinets or move submarines within firing distance of each others’ countries.

‘Love. I celebrate it, practise it, mourn it and fight for it.

But my appreciation and experience of this most seductive of topics is dwarfed by Shakespeare’s understanding of love. My mind spins when I imagine how his life must have been; how hard he worked, how far he travelled, how dark and scary the landscape he lived in must have been. If I close my eyes and propel my imagination back in time, I hear the tectonic plates of the planet creak. I see the ground opening up and Shakespeare clambering out of a deep crack in the earth’s surface; dusty, desperate and gasping for air…then, with the clarity of clear water, he sings from the earth from which he was born. Shakespeare gave voice to desire and to grief, to parenthood and to marriage. He charted the waters of courtship and the loneliness of a failing marriage. He mourned for us, married for us and betrayed for us. He gazed fearlessly into human existence like no other, before or since. Pre-Freud, pre-therapy, pre-equality or civil rights – he asked the big questions. ‘What a piece of work is a man?’ And my! I love him for it! And in this light I shout the same question into the Thames breeze.

And the answer comes back at me, sweet and low on the same breeze. Men and women are capable of all things. We are capable of greatness and cowardice, of poetry and banality. We can feel deep hatred but we can also move mountains with compassion, empathy and strength. We can bear a grudge but we can also provoke change. Love is at the centre of our human experience. It provides us with the best of times and the worst of times and reminds us that we are alive, connected and part of something greater than ourselves.’