Thousands of people are dying in Britain. In this year of 2020, a pandemic is sweeping across the globe. In some countries the death toll is over thousands, in some it’s hundreds, in a few only in the tens, and in some, such as Vietnam, none reported.

A crisis can be revelatory. Cutting through the babble and showing the nature of a government: are the politicians problem-solving in the best interests of the people, or are they ideologically driven and sacrificing citizens?

On 22ndApril, The Financial Times, one of Britain’s most respected papers, revealed the scale of UK deaths. ‘The Coronavirus pandemic has already caused as many as 41,000 deaths in the UK, according to a Financial Times analysis of the latest data from the Office of National Statistics.’ This is a rather greater number than the 17,337 given out by the government on the same day, and probably the highest in Europe.

If such a catastrophic number of people, whether 17,000 or 41,000, had died in a terrorist atrocity, we’d be demanding revenge and marching to war.

From January onwards, as Coronavirus began to ravage countries, as the World Health Organisation gave warnings and advice, as countries swiftly formulated strategies and plans, our own government rubbished the seriousness of the threat; Johnson cheerily gushing about shaking hands with Covid patients. Perhaps he thought he could make it go away with a few Latin phrases and a Greek ode?

As late as 3rdFebruary Johnson gave a speech in which he placed the market above ‘medical rationale.’ The ideology of the privileged was at play. It recognises neither truth nor humanity.

Boris Johnson is the prime minister who’s suppressed The Russia Report, appears to be under shadowy Russian influence, uses the ‘old boys’ network,’ whenever convenient, is wedded to delivering Brexit and selling off the NHS, no matter how much he compliments it in public, for saving his life when he himself caught Covid19. Johnson and his cabinet are ideologically opposed to the NHS as Shamir Sanni writes. Johnson has also brought in election gurus to ‘handle communications over coronavirus’. Why does information about coronavirus need handling’ one might ask?

On 19th April The Sunday Times published a blistering report on the government’s lack of a proper response to the threat posed by Covid19, commenting “Failings in February may have cost thousands of lives.” 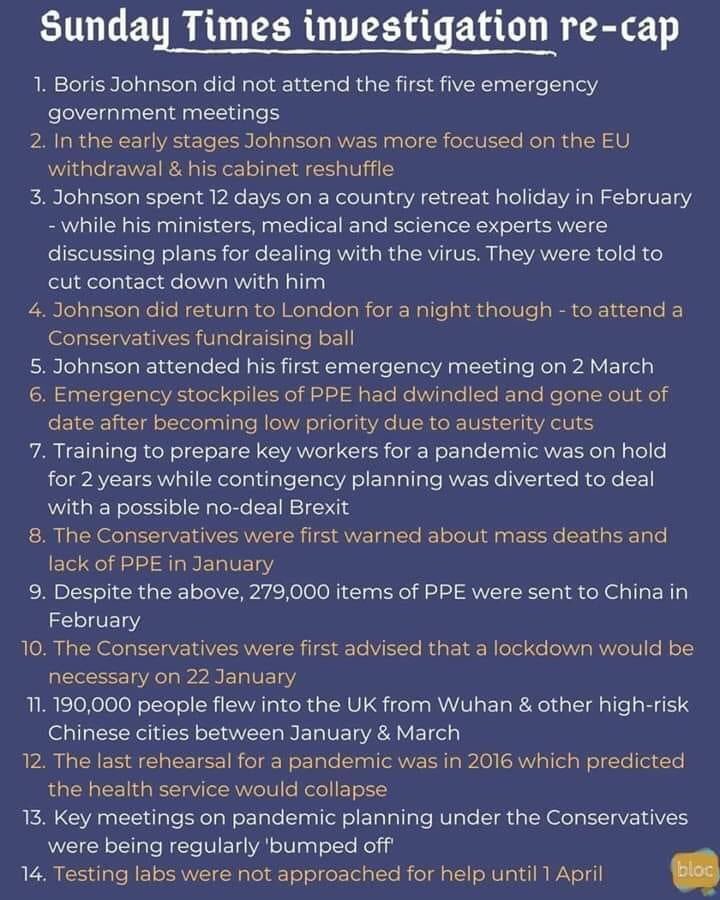 “It is the first responsibility of government in a democratic society to protect and safeguard the lives of its citizens. That is where the public interest lies.” The House of Lords asserted in an unrelated hearing.

Britain’s ruling class has been at war with its people since the last serfs were freed. And that was around 1574. Serfdom: “…whereby great landlords ensured that others worked to feed them and were held down, legally and economically, while doing so.

Let’s remember this is the same ruling class which engaged in slavery and colonialism, inflicting terrible atrocities for hundreds of years. As well as engendering the Partition of India and setting off a holocaust.

From January, Britain’s nearest neighbour, The Republic of Ireland, implemented a containment strategy, cancelled St. Patrick’s Day celebrations, and started their Stay at Home phase on 27thMarch, continuing to the present. Germany put their laboratories on alert and formulated a policy of Test, Track and Treat. New Zealand, whose prime minister declared she didn’t want to lose a single New Zealander’s life, decided to eradicate the virus, adopting lockdown before any deaths were even reported.

Surely the leading lights of the British government were similarly determined that ‘no British lives should be lost?’ And were busy learning from best practice around the globe, appointing taskforces, planning and organising? I fear not. First they delayed and distorted, waited till March, then went completely off-piste, announcing a strategy of ‘herd’ immunity. An untested tool for responding to a pandemic. ‘Epidemiologists and medical experts immediately assailed the plan as a dangerous gamble.’

If Marie Antoinette said ‘Let them eat cake,’ then the UK government was saying ‘Let them catch Coronavirus.’ ‘Herd’ immunity couldn’t have been a more literal metaphor for how the government views the people. Johnson’s chief adviser, Dominic Cummings (whose father-in-law owns Chillingham Castle), is said to have urged the ‘herd’ immunity strategy, and is reported as saying “if a few pensioners die, too bad”. This report was afterwards denied by Downing Street.

The UK government later appeared to be changing tack when they announced measures for social distancing, however their subsequent actions suggested herd immunity remained the strategy, as a litany of failures mounted up, including the refusal to join EU procurement schemes, failing to source enough ventilators, not initiating a useful testing and tracking programme, and above all, not ensuring proper supplies of Personal Protective Equipment for medical staff. That’s like sending your soldiers into battle without any armour.

As if these weren’t sufficient criminal weaknesses, like a child throwing a match on petrol, the government allowed super-size events such as the four day Cheltenham Festival, and a Stereophonics concert in Cardiff. Hundreds of thousands of people attended these events.

You don’t have to be born into a blue-blooded family to practice privilege and ideology as Rishi Sunak and Priti Patel have proven. Sunak was educated at the private boarding school Winchester College, and though Patel attended Watford Grammar, her ideology aligns her fully with this class.

Patel, along with four other Tory MPs, is a contributor to the book ‘Brittania Unchained’ in which British workers are accused of being “the worst idlers in the world.” The book advocates an unregulated market, and the end of workers’ rights, social and health benefits. Graham Hewstone @HewstoneGraham says “This is a tome proposing neo-feudalism.” So, there we have it – back to serfdom.

Sunak is revealed as supporting a policy of ‘run this hot,’ meaning lifting the lockdown while Covid19 is still deadly, in an article in The Sunday Times.  Michael Gove, Chancellor of the Duchy of Lancaster, is also shown advocating this policy. Implying they’re both pro-death. A twitter user commented, ‘such a view sounds like premeditated murder.’

Covid19 is a ferocious disease and can attack almost anything in the body. People in Britain are dying in their hundreds and thousands. The “lucky” ones, in hospital, the majority alone and bereft, isolated in their rooms, gasping for breath, suffering agonizing deaths. Families are left heartbroken and grieving as a mother or father, brother or sister, child or friend, is carried off by the disease. The death toll among doctors, nurses and hospital staff, is an everlasting indictment of this government. Highly trained and dedicated professionals, whose years of training, experience and knowledge have been lost to us; including support staff, whether cleaners or porters who went into work every day, so they could provide the assistance needed to save lives. No wonder mass graves are being dug in Britain.

We should be furious, raging, incandescent. Our government’s denial of medical rationale, their failure to learn from other countries, their negligence towards protecting people’s lives, has caused suffering and torment. It’s left families without breadwinners, children without a parent, or even orphaned; carried off the brave and courageous who worked to the end. The human cost is incalculable.

Britain is one of the richest countries in the world. With highly developed infrastructure, an educated workforce, world-quality professionals, and a National Health Service staffed by amazing workers at every level (despite the deliberate underfunding and erosion by Tory governments).

Privilege and ideology should be held to account when the immediate threat is over. There will be enquiries, and if it turns out Britain has suffered the highest death toll in Europe, I say those enquiries should be led by the Supreme Court and criminal action taken against any held responsible; “states are justified only by their capacity to protect their citizens, and, when their powers turn atrociously against a state’s own citizens, they lose all warrant, and those who direct and obey them become subject to judgment and sanction by the entire human community.”