‘Even without speaking words, I’m walking down the street and saying things, just based on my turban. I think this is powerful and holds me accountable to my actions.’ Says Harinder Kaur Khalsa, Deputy Sheriff, Alameda County. Her portrait in the book Turbans and Tales, presents a woman with a solid, confident presence who looks you straight in the eye. 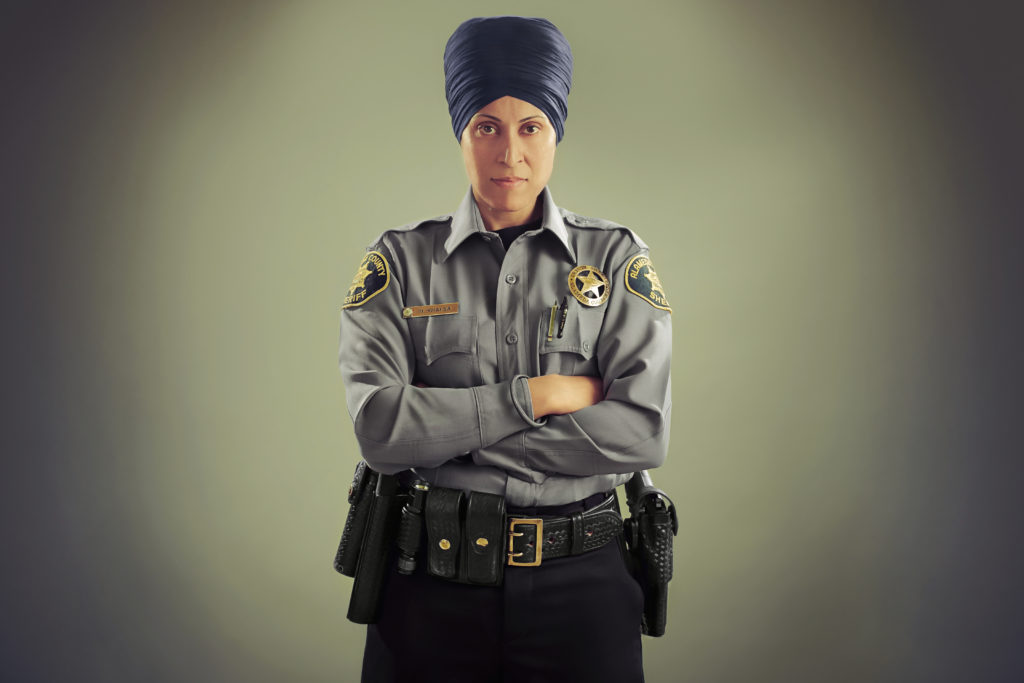 I was struck by her powerful sense of personal responsibility, and her description of her turban as being the outward expression of it. In a world where few people are prepared to own their actions, particularly those who exercise power – whether in offices, families or official capacities, Deputy Sheriff Khalsa’s declaration shows rare integrity. Especially when we learn she had to fight long and hard for the right to wear her turban with her uniform. 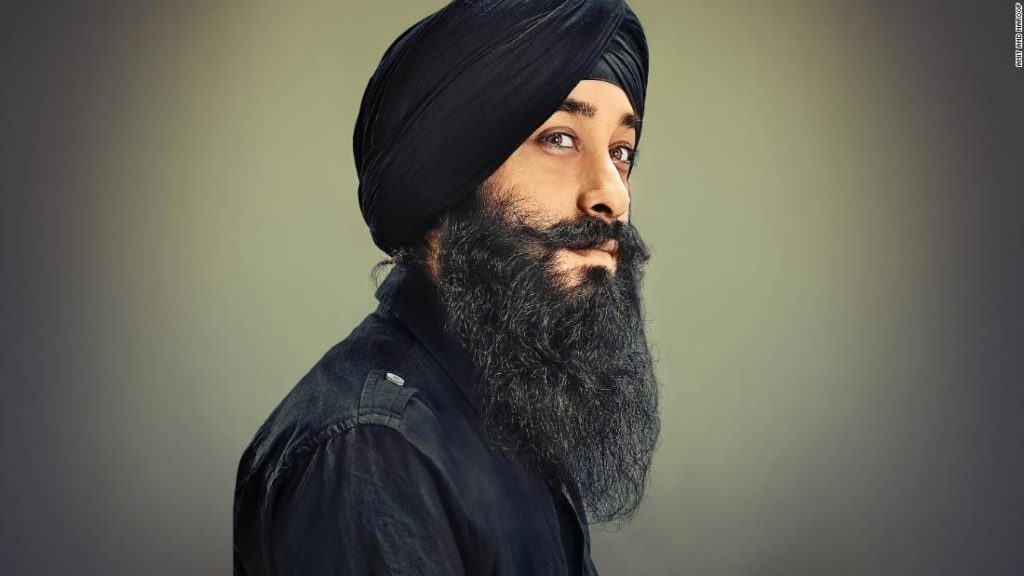 Turbans and Tales is a stunning collection of portraits of turban wearing Sikhs in Britain and the States, as well as a book which touches on personal stories, history and philosophy. Its engaging tone also takes us ‘backstage,’ into the roller-coaster journey, the set-backs and struggles of bringing such an ambitious project to fruition.

The book has evolved from the hugely successful The Singh Project by the talented photographers Amit and Naroop, who’d set out ‘to capture and define what the modern Sikh identity represents.’ Aiming to mark a moment in history. 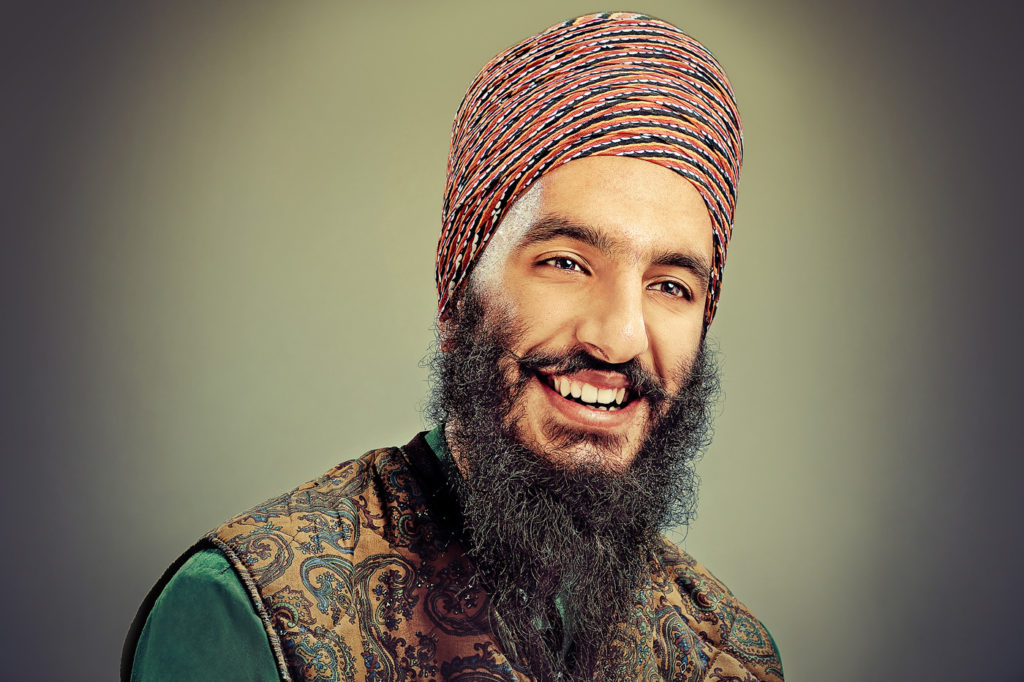 Keen to ensure the subjects were respected for who they were, they decided to create a backdrop which would be used for everyone. Putting the person centre stage, making them ‘pop-out,’ and setting a tone that was timeless. ‘Simple and elegant’.

Growing up in a Sikh family, I always knew the turban was far more than a piece of cloth. Turbans and Tales verbalises how the turban and the wearer become indivisible. Articulating a dynamic exchange in which the turban affects the wearer’s everyday life and decisions, and the wearer interprets the turban’s meaning and purpose.

Not all turbans are the same and not all turban-wearers are made from the same mould. Reflecting the revolutionary origins of the Sikh turban when it was adopted as an act of defiance against the persecution of Emperor Aurangzeb in 17thcentury Punjab. 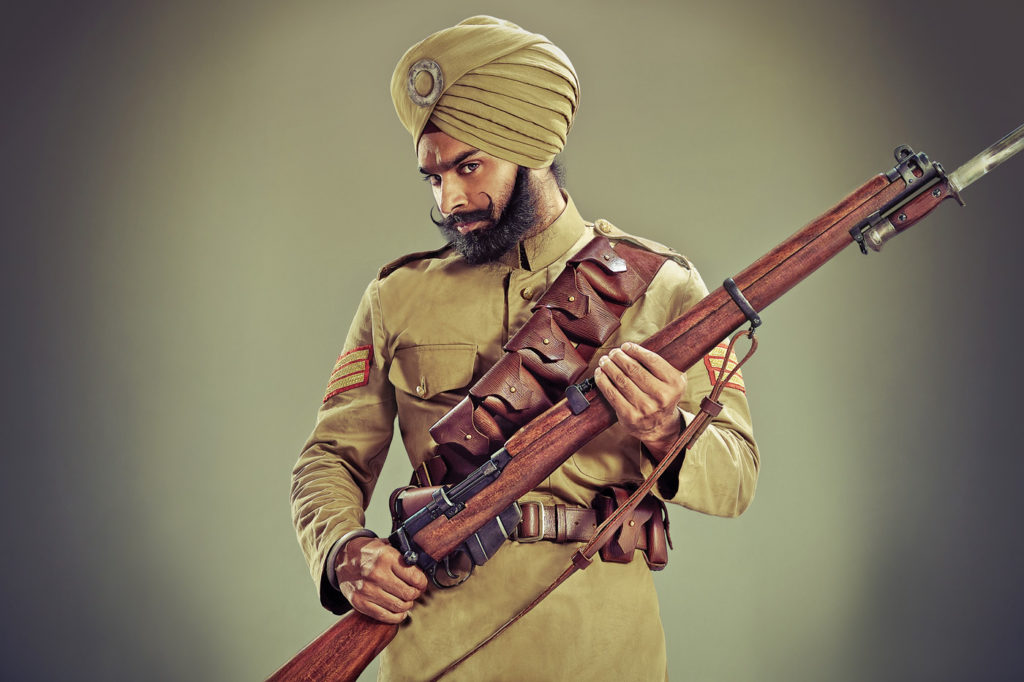 A fascinating history of the turban is included, tracing its origins from around 2350 BC. Mesopotamia, charting Sikh history along the way, and the influence of the British on the turban’s shape and style. 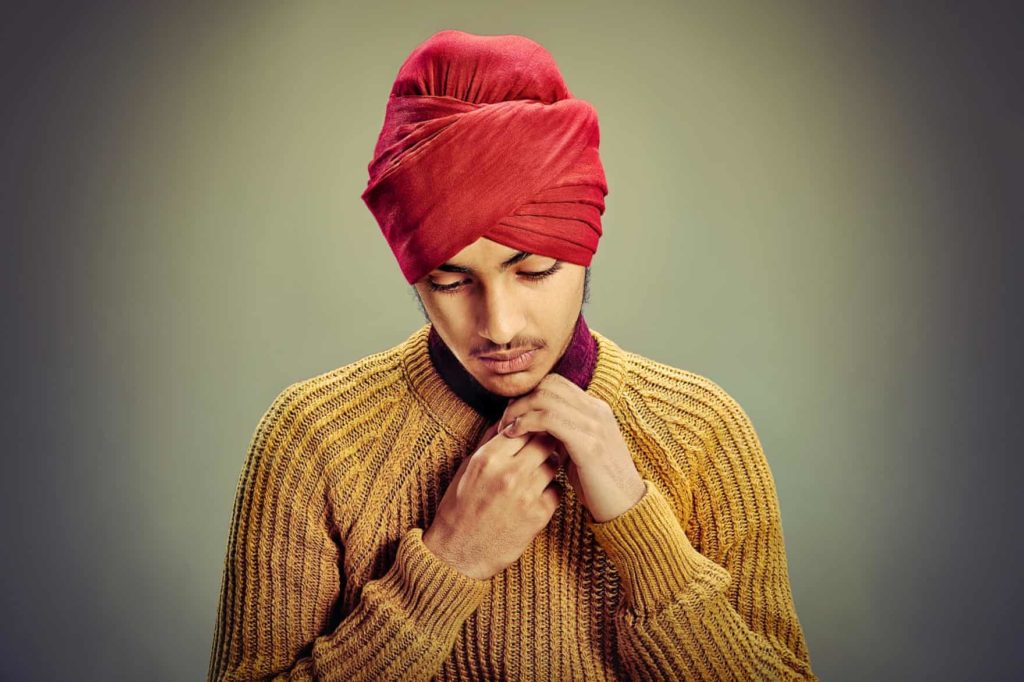 Turbans and Tales focuses on the turban within the contemporary British and American context, and touches upon the different ways in which it’s perceived in the two countries. The bullying reported by many of the participants, particularly at school, is shocking in its regularity. Discrimination in seeking work continues to be faced by many turban wearers. The turban can be a hard taskmaster. Also highlighted is the surge of violent attacks against Sikhs which occurred after 9/11, and the work of the Sikh Coalition, the Sikh civil rights organisation set up in the wake of that catastrophic attack.

The ‘tales’ in the book cover a compelling variety of people who believe in pursuing their ambitions, without the need to conform. When running for the office of mayor in Hoboken City, Ravinder Singh Bhalla was asked “How are you going to win with a beard and a turban?” In a hard-fought race, including racist flyers being circulated about Ravinder’s identity, in November 2017, Ravinder did indeed win the election and became the first turbaned mayor in America. 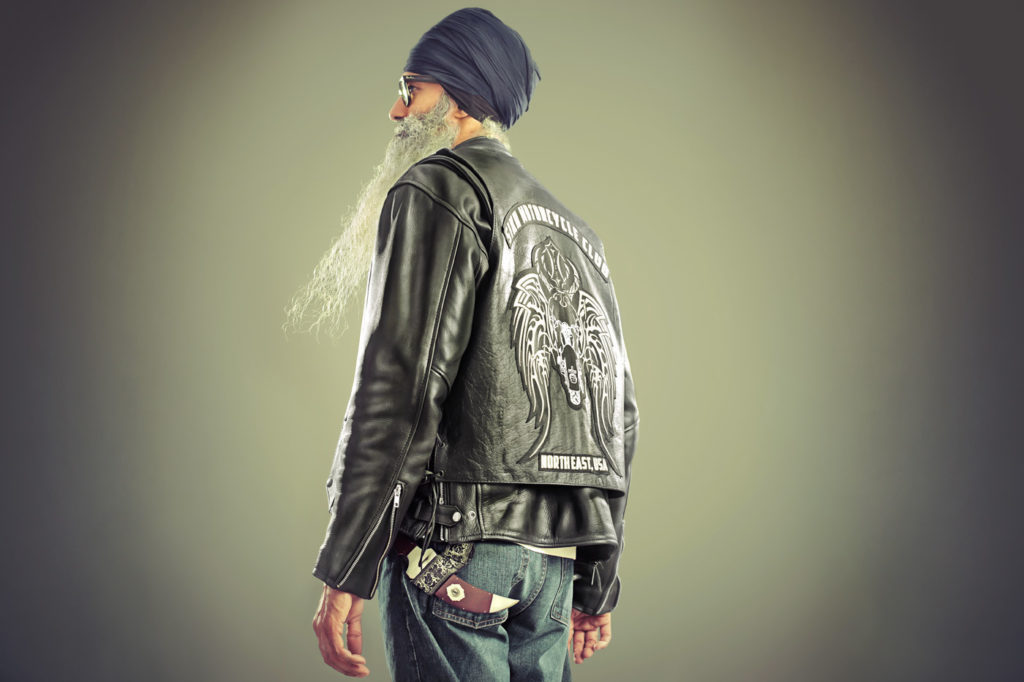 If one of the aims was to ‘…define the modern Sikh identity,’ then the book succeeds in presenting a resolute, progressive and vibrant community, which includes nurses, musicians, soldiers, aid workers, fashion models and many more. Their defining feature being their commitment to wearing their turban, no matter the prejudice or targeting they may face. And doing so with their own choice of style, glamour and glitz, or modest simplicity.

Deewan Singh, a music producer says ‘When I tie my turban, it is always an amazing experience and is almost like an intense meditation. I am obliged to look in the mirror for a considerable amount of time whilst wrapping my turban and this provokes much reflection. Each layer is like a positive affirmation.’ 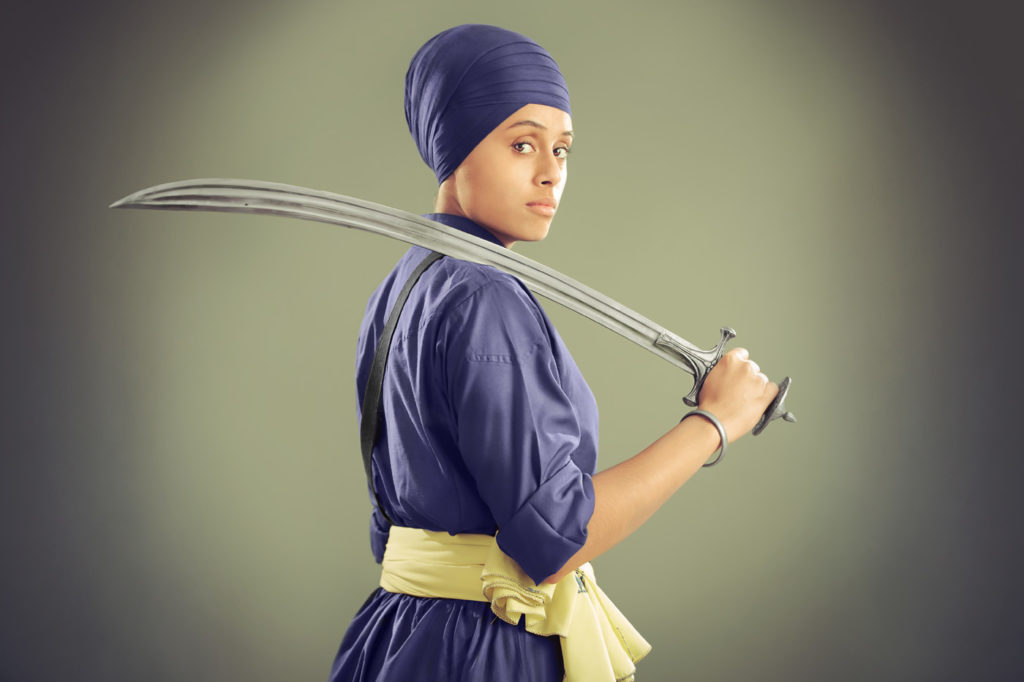 Navneet Kaur, who’s trained in gatka, the Sikh martial art, ‘… began tying a turban motivated by the principle of equality in Sikhism. It is a commitment that helps her to keep her life in order and enables her to be the best version of herself.’ 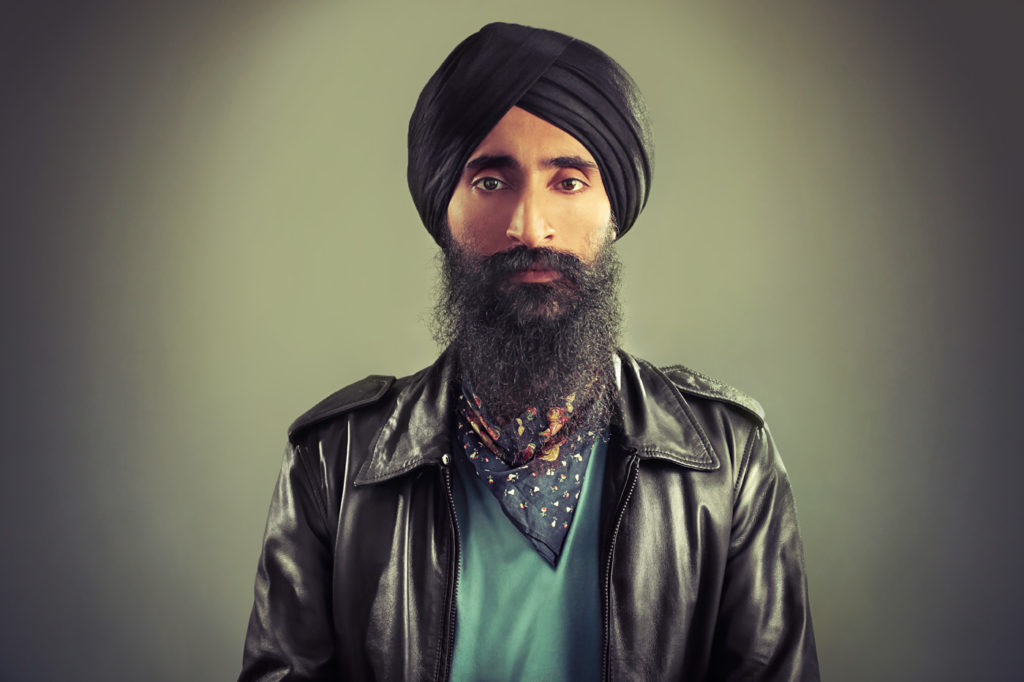 For the actor and designer, Waris Singh Ahluwalia, his turban represents his commitment to equality, justice and humanity. In 2016 when he was prohibited from boarding a flight from Mexico City, because of his turban,  he remained in the city, insisting the airline must publicly apologise and train its staff, not wanting others to suffer the same discrimination. 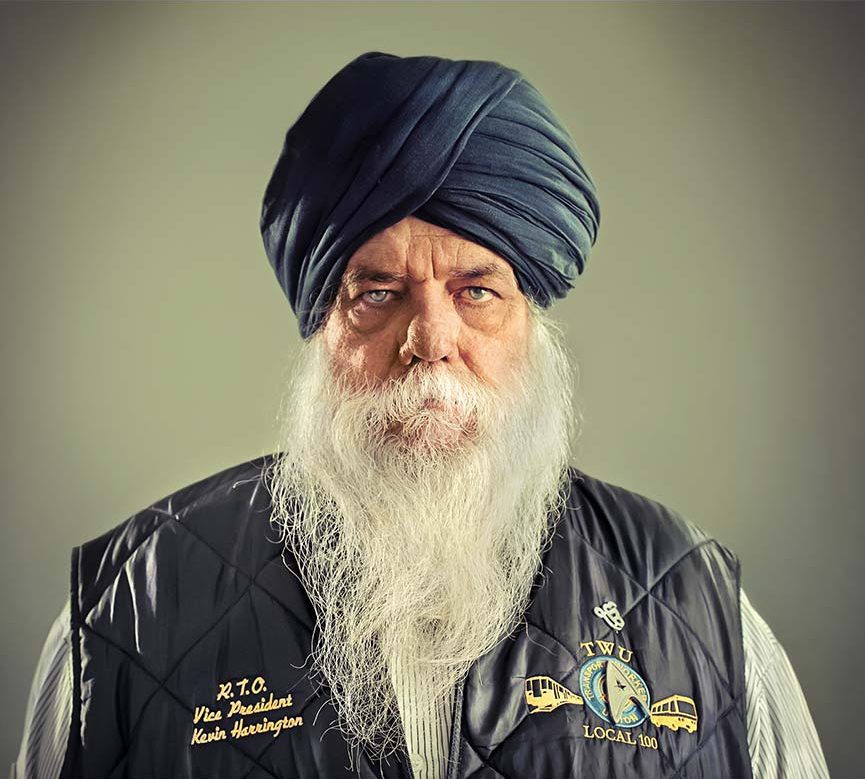 Sat Hari Singh Khalsa, aka Kevin Harrington, a retired subway operator in NYC, saved the lives of 800 passengers on the day of 9/11. Despite being honoured and awarded for his heroic act, two months later Kevin was out of a job, having refused to accept the Transportation Authority’s new regulations for religious headwear, maintaining they violated his right to religious freedom. ‘I felt it was very anti-American.’ He said.  It took him seven years of legal battling, with the help of the Sikh Coalition, to win a settlement which ‘…ended the policy of branding or segregating Sikhs and Muslim workers.’

‘Whenever you can confidently stand out from the crowd, you’ll be noticed and remembered.’ Says Sonny Singh Caberwal, entrepreneur and technology executive, who believes his turban is a valuable reminder of his belief system and a personal and professional asset.

Turbans and Tales is a beautiful book, a feast for the eyes and food for the mind: combining striking portraits, peoples’ stories and human struggle. Echoing far more than its parts, in the way any amazing work of art does. Some of the portraits stay in your mind long after you’ve closed the book. Amit and Naroop aren’t just excellent photographers but also have that instinct, a sixth-sense which perceives the essence, the ‘truth’ beneath the surface of a person. 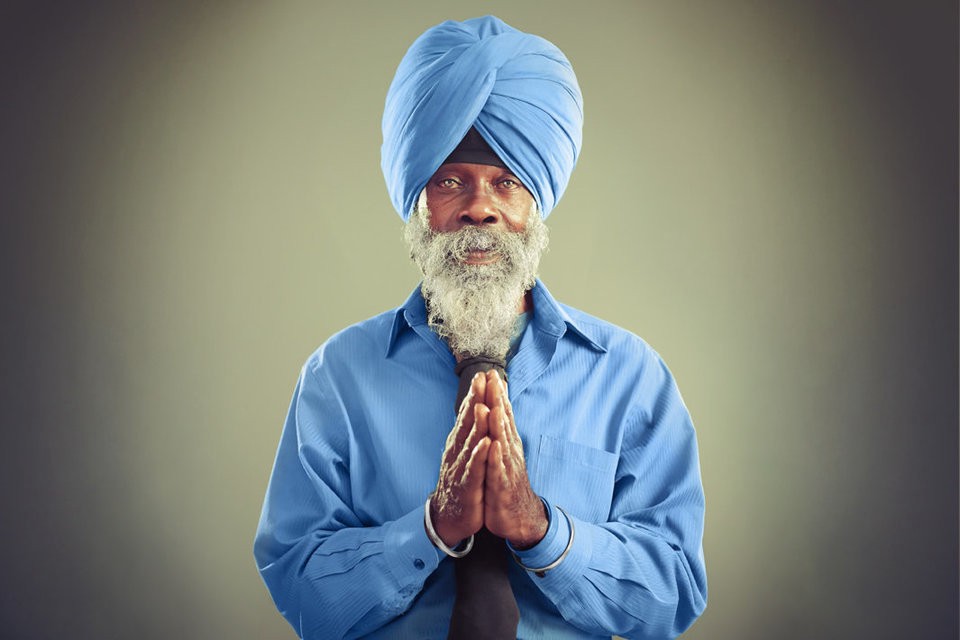 The last portrait in the book, of Lathan Dennis-Singh who was born in Jamaica, of Afro-Caribbean heritage I’m assuming, who experienced devastating personal losses, moved to the States and became an aerospace engineer, and who adopted Sikhism forty-eight years ago when he was a student, has a portrait of such simplicity it’s like clear transparent water, and yet, I found myself filled with awe and humility. 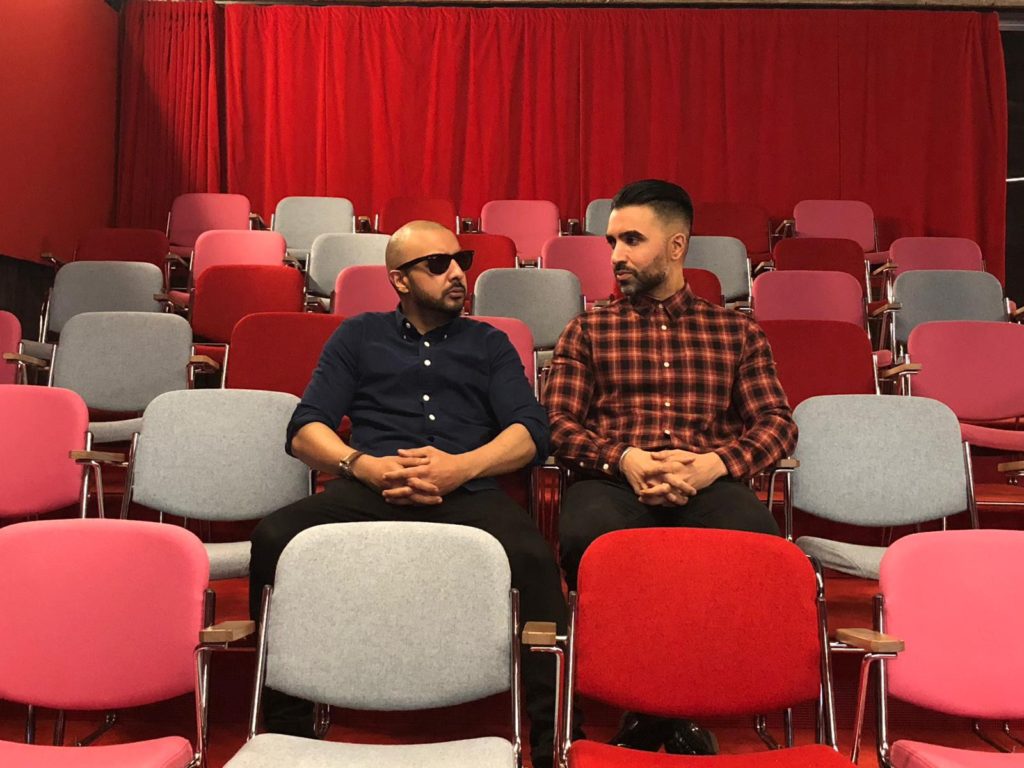 The last words must go to Amit and Naroop: “Even though this book focuses on the Sikh identity, it represents a set of values that everybody can learn from. Defiance, pride, confidence, integrity, and respect. In an age where we crave ‘likes’ from others, this book aims to promote the idea of liking yourself, regardless of your identity.’