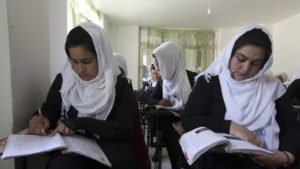 This is precisely why I have no faith in faith schools. Religion is one thing and social convention another, but in faith schools the two are practised as being interdependent. This is most often true of ‘revealed religions,’ such as Judeo-Christian and Islam. As if ideas of the religion, rely on replicating the social traditions and dress of the age in which the religion was revealed.

Religion comes from the soul, and can be practised wholeheartedly without the need for outward symbols, or particular forms of dress.

Social convention, which we can also call tradition, are the rules by which societies perpetuate their social identity, make individuals cohere into a group, and perpetuate power structures. The most common power structure being the different roles given to men and women, and the different value placed upon them. It’s fair to say that in most cultures, men are valued as being superior and women are seen as being inferior.

In many societies this value system has been challenged and progress has occurred. But when this value system is defended as being part of religion, therefore having divine sanction, it becomes impossible to critique, for then the argument enters the domain of divinity, and divinity, it’s claimed can’t be argued with, because divinity is morally perfect.

Education has historically provided a pathway out of poverty, limited choices and oppressed lives. In addition, it’s enabled millions of women to become leaders, entrepreneurs, scientists, artists, and to be economically independent.

Education provides the universal, integrates young people into a wider world, enabling them to take their place in the mainstream, whether they’re boys or girls. At its best, education should compensate them for whatever lack may exist in their homes, whether it’s books, diverse ideas, knowledge, skills or philosophies. And should inculcate in every girl and every boy, without any shadow of doubt, that they are equal in dignity and value.

Segregation of boys and girls, which tends to happen in faith based co-ed schools, is troubling, because it embeds the idea that separation of the sexes is a moral and religious necessity. Along with that ethos will come a raft of social practices and traditions, which treat girls in one way and boys in another, most often to the detriment of the girls. There have been reports of a school where girls didn’t have access to science laboratories in the same way boys had, and that the girls were limited to knitting and sewing. Another school where girls could only have dinner after the boys had finished. And a school where the boys and male staff had excellent bathroom facilities inside the school building, but girls and female staff had to go out of the school, in all sorts of weather, to access their bathrooms.

In a similar vein Accelerated Christian Education schools have been reported as teaching that women are to be subservient to their husbands, their pastor, and other male figures. A former, female pupil sums it up thus: “There was a strong culture of men being revered and women being dangerously sexual and having to cover up. It made me self-conscious of being a woman.”

It could be argued that single sex schools, those for only girls or boys, also practise segregation, therefore why object to it happening in mixed schools. It’s a question of emphasis. In single sex schools, all resources, policies and arrangements, are geared to doing the very best for their pupils. Several Muslim girl’s schools have been rated as outstanding by Ofsted, such as the Manchester Islamic High School For Girls

However gender segregation, has become such a contentious issue between a school and Ofsted, that the case has reached the courts.

Last year, School X, was inspected by Ofsted, which raised concerns about a number of leadership failings including those involving gender segregation, the absence of effective safeguarding procedures, and an unchallenged culture of gender stereotyping and homophobia. Offensive books promoting rape, violence against women and misogyny were discovered in the school library. Some girls also complained anonymously that gender segregation did not prepare them for social interaction and integration into the wider society. As a result of what it found during the inspection, Ofsted judged the school to be inadequate and placed it in special measures.

The school took legal action to stop Ofsted publishing its report. In November last year, the presiding judge, Mr. Justice Jay found that gender segregation did not amount to sex discrimination since both boys and girls were ‘separated equally’.

I’m certainly no legal eagle, but respectfully beg to differ with Justice Jay. Any school whose library stocks books promoting rape, violence against women and misogyny, is by this very act not just discriminating against its female students, but also putting them in danger. Such literature clearly designates women as lesser beings who can be preyed upon by men.

Ofsted have appealed against the judgement, and the case will be heard in the Court of Appeal on 11th  – 12th  July.

The highly respected organisation, Southall Black Sisters and Inspire, ‘ are intervening in the case because of its great public importance – especially for minority women and girls.

SBS and Inspire point to the way that fundamentalists have sought to expand their influence, attack women’s rights, and  create a fundamentalist vision of education in the UK: one that discourages mixed-gender activities as ‘Un-Islamic’ and ultimately legitimises patriarchal power structures.

As a member of Asian society, I’m fully aware that some sections are more orthodox than others. And in those communities traditional roles are inculcated, and subservience from women is taught as being the natural order of the cosmos. Women aren’t born subservient: they’re inculcated into it, by subtle and unsubtle means. Honour killings don’t come out of nowhere: they arise from a particular combination of metaphysics and convention. Gender segregation in schools is another nail in the coffin.

We have a duty to protect the educational needs and rights of young girls, and I urge everyone to join the protest being organised by SBS and Inspire, for the hearing of the case on: 11 and 12 July 2017 from 9.30am onwards, at Royal Courts of Justice, Strand, London, WC2A 2LL

They’re urging people to pack out the public gallery in the court ‘so that the judiciary is under no illusion as to what is at stake.’

To join the demo please go to: Eventbrite page