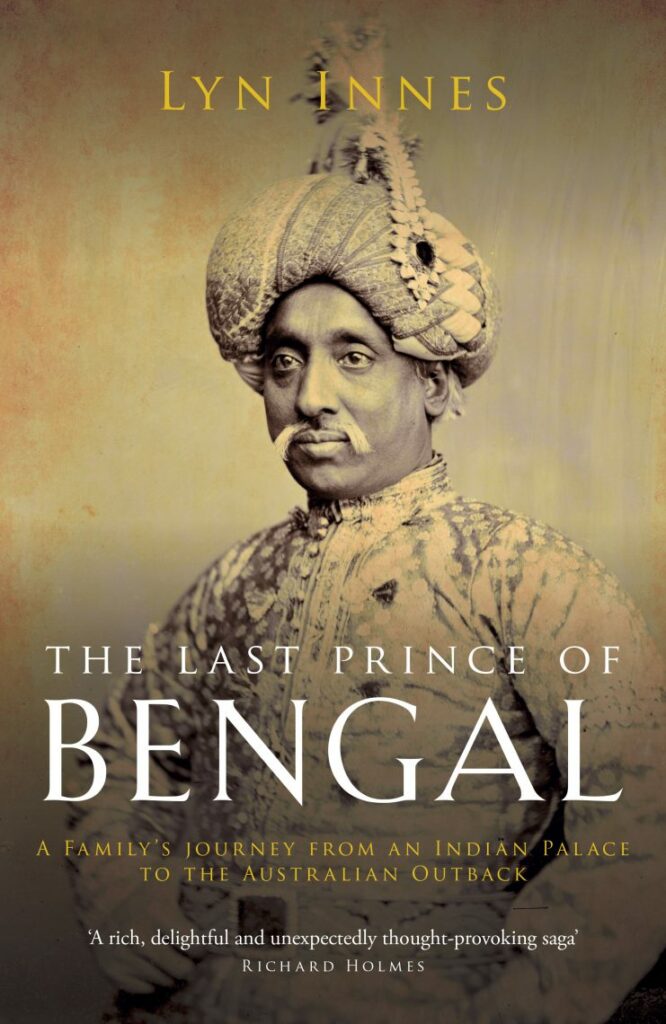 Everyone’s digging up the past. From the tv series Who Do You Think You Are to the booming business being done by ancestry and heritage companies, uncovering family history has become a serious social trend. Could it be we have a profound, visceral need to know our family’s past, the twists and turns of family history, the ancestors whose genes may lurk in our DNA? Perhaps this deep desire is unsurprising in an era of fragmentation, the changing nature of family, and the generational diasporas scattered across the globe. No longer do we live in villages where the names and lives of our ancestors are part of the collective memory, fed by the reminiscence of elders, and where family trees are handed down from generation to generation, from the cradle onwards.

Lyn Innes had no such treasury of rich family history when she was growing up in the Australian outback. Only a sepia-tinted photograph of an elegant man, whose complexion was just a shade darker than that of her Scottish grandparents. Evoking more questions than providing answers. The young school-going Lyn may not have known, but the bullies on the school bus certainly did, gossip having spread. Suffering daily taunts and jeers centring around ‘black princess,’ Lyn apprehends they’re connected to the man in the photograph, her mother’s father. “It was on that school bus that I first realised that I was not only Australian, but also, in some sense, ‘Indian.’ Later, this realisation grew into determination to understand my Indian heritage, and to understand it in terms that took into account, but were not limited by, the attitudes of my Australian schoolfellows.”

Many decades later, that determination has resulted in the warm and engaging book, The Last Prince of Bengal. By this stage, Lyn Innes has become Emeritus Professor of Postcolonial Literatures at the University of Kent, Canterbury. But there are no dusty, academic passages of abstract writing in this book. What emerges is a richly detailed tapestry of fascinating personalities, courtly and social conventions, whether in the Bengali city of Murshidabad or the heart of the British empire, London.

I first met Lyn many years ago, when she invited me to give a talk to her students at Kent. As we chatted afterwards, Lyn mentioned her unknown Indian ancestors and bemoaned the fact that she’d only inherited her father’s Scottish genes, resulting in her fair skin and blue eyes. The Indian genes may have eluded her, but their insistent call to be unearthed, investigated, and gathered together from remote archives, is very much in line with the passion of British/Asians and others in the diaspora, to research their personal and cultural history, to interrogate the colonial narrative and fill in the gaps created by migration and historical upheavals, such as Partition. For example, tremendous excitement was generated recently by UKPHA (UK Punjab Heritage Association), in discovering and digitising the records of 320,000 Punjabi soldiers from WW1 which had lain forgotten in the basement of Lahore museum; included in these archives, is the record of my own grandfather, Bir Singh from village Dhanowali. On a slightly different note, the historian Priya Atwal’s book, Royals and Rebels for the first time, chronicles the story of the women who were foundational in helping to build the Sikh Empire of Maharaja Ranjit Singh, including a rebuttal of the scurrilous manner in which Rani Jindan was characterised by colonial powers. The derogatory colonial perception of Indian women is also described in The Last Prince of Bengal. Such undermining tactics were designed to smear Indian women who may pit their influence against that of their colonial masters.

The Last Prince of Bengal is a beautifully researched book, conveying the personal stories of the Royal family of Bengal, straining under a punitive and parasitic British Raj. Chapter 1 begins with a quote from Lyn Innes’s great-great Indian grandfather, Nawab Nazim Humayun Jah: “My ancestors and the British Government made Treaties and the Government kept all the country, all the money, and left me nothing but the old and useless paper.”

Thirteen chapters, flag-posted by dates, start the story in 1838 and take it to 1941. Into those chapters are packed glamorous royal protagonists, wounded in spirit and status, striving to protect their rights; racist and exploitative political agents; vivid accounts of English and Indian social and historical life; a young nawab’s lifestyle; African slaves as status symbols. The Cinderella stories of an Abyssinian slave girl who bears the young Nawab (Mansour Ali Khan) his first son, his insistence on marrying her; and much later in London, an English chambermaid, Sarah Vennell whom he also marries, elevating her to the status of Nawab Begum.

The main story can be roughly divided into two parts: the first tells the story of Lyn Innes’s great-grandfather, Mansour Ali Khan. The second major story is that of his mixed-race English-Indian son, her grandfather, Nusrat Ali Mirza – the elegant man of the photograph.

Mansour Ali Khan, Nawab Nazim of Bengal, Bihar and Orissa, an area three times that of Britain, ascended to the throne when he was only eight years old, after the untimely death of his father. His life echoes that of Maharaja Duleep Singh of the Punjab, who was also only a child when the Punjab was annexed. The apparatus of colonial manipulation swung into action, side-lining his family and taking charge of the child Nawab’s education and up-bringing, including moving him into a different building from his mother. The aim had been articulated by Thomas Babington Macaulay in his Minute on Education in 1835 to “create…a class of persons, Indian in blood and colour, but English in taste, in opinions, in morals, and in intellect.”

A painful anecdote reveals the nature of the young Nawab’s life. Subjected to an arduous and strict regime, he learns to control his anger and frustrations. “I am obliged to do all that Captain Showers tells me,” the fourteen-year-old-Nawab declared, “because if I do not, he will not allow me to visit my mother.”

Through the Nawab’s life story we learn about lesser-known historical events, such as the Santhal Peasant Rebellion of 1855, “resisting the extortionate taxes and corrupt moneylending practices supported by the local zamindars (landowners) and the British Government.” Mansour Ali Khan supports the British in crushing this rebellion, and two years later also supports the British in defeating the so-called ‘mutiny’ of 1857. Lyn Innes unpacks the causes for such actions: “One reason may have been he did not see the sepoys and peasants involved in the rebellion as ‘his own people,” and goes on to say that many Indian aristocrats feared the peasants and sepoys as a threat.

We all know about the Partition of 1947, but how many of us know about the Partition of Bengal in 1905, enacted by the British. By this stage the family story has moved into the twentieth century. The British partitioned Bengal, with mainly Hindus on one side and mainly Muslims on the other. Opposed by both sides, this first partition led to boycotts and violent protests across India, and was eventually reversed in 1911.

The second major story, that of Lyn Innes’s grandfather, Nusrat Ali Mirza, the mixed-race son of Sarah Vennell and the Nawab, covers his life in Britain and marriage to Elsie Algar, the couple becoming known as the Prince and Princess. Their lively, bohemian life in Paris is described, where they’d gone to study art. The couple are compelled to return to London as the first World War rears its ugly head. As their family grows, to evade racism Nusrat insists on changing his sons’ names to English ones, and eventually sheds his own complex family history, when he changes his name to an English sounding one, to be able to migrate to Australia, and circumvent its racist immigration laws.

In the final pages of the book, Lyn talks about the writing of this history as an exploration of her own identity. A need that will resonate with many in the diaspora, who also grapple with this issue. When Lyn finally visits the city of her ancestors, Murshidabad, and meets the current young nawab, Syed Reza Ali Meerza, she’s immediately struck by his resemblance to her mother. When the young nawab is asked what relationship she is to him, he takes her hand and says, “She is my sister.” The next sentence comes straight from Lyn’s heart, “The distance between myself and my Indian ancestors had suddenly narrowed.”

As The Last Prince of Bengal reveals, migrations and historical events may blur the past, but the desire to know our full identities and cultural histories, propels us to investigate and uncover.