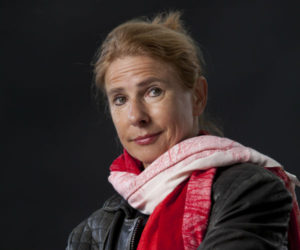 Fiction and Identity Politics? Since Lionel Shriver’s speech on the subject at the Brisbane Writers Festival, old ghosts have risen and new imperatives exalted.

I’m a fiction writer (novels and short stories), and yet when people ask me what I write about, I go speechless – I stutter, stumble and nervously laugh off the question. Because there isn’t a label or a pithy description which I can comfortably reel off, there isn’t only one idea that I’m interested in; fiction is a freedom I don’t wish to circumscribe. And yet, I can see a sentence already sitting in their heads, just waiting for me to speak it: ‘I write about Asian women and their problems.’ Oh, did I forget to mention I’m a woman of Indian origin who lives in Britain?

So it appears my fiction writing isn’t defined by my intelligence and imagination, but by my ethnicity and gender. A strait-jacket that I reject. Sorry Yassmin Abdel-Magied.

My first novel, A Wicked Old Woman, did indeed tackle the subject of Asianness, immigration et al, and was described as ‘the first intrinsically British-Asian novel.* However, I moved on, because arranged marriages and Asianness were a creative dead end. It’s here that I part company with those who see fiction writing as coming entirely from experience, or as the means of recording a community’s life. We have history and journalism for that.

I doubt that fiction can ever be explained or adequately described by a word or a sentence. We can use analogies, judge it by what it does or does not do, but even then, we’ll never pin it down – and never should we try to. We would impoverish and diminish ourselves. Fiction comes from the known and unknown parts of us, from the intellectual and the imaginative, from the precision of language to the magic of imagery, from the good and evil of us, the truthful and the untrue. It’s part of our yearning to find purpose and meaning, to expand our hearts and minds; to engage with a wider world, philosophies that aren’t ours, and a humanity that is as flawed as it is amazing.

Shriver, in her speech, described the fall-out of the sombrero scandal at Bowdoin College, in which students had been disciplined for wearing sombreros at a party, deemed to be “an act of ethnic stereotyping,” and asked the following question “But what does this have to do with writing fiction? The moral of the sombrero scandals is clear: you’re not supposed to try on other people’s hats. Yet that’s what we’re paid to do, isn’t it? Step into other people’s shoes, and try on their hats.” Well yes and no. Because the fiction writer’s ‘hats’ aren’t entirely literal nor entirely invented. The fiction writer needs to exercise responsibility along with freedom. Writers can’t claim to be ignorant of history or its consequences.

The ethoses of cultural appropriation** and identity politics*** are the latest progeny of colonialism and racism, therefore the fiction writer needs to be a little ahead of the game. Shriver can’t pretend she doesn’t know her country’s history with Mexico. She’s right to reject any attempt forbidding fiction writers, from writing about characters who don’t come from their own background, but fails to place a responsibility on writers to first check out their own prejudices and preconceptions; their ability, or inability, to create imaginative veracity for such characters.

The play ‘Counting Stars,’ by Atiha Sen Gupta, a recent success in London, was about two Nigerian characters. Sen Gupta is of Indian and Sri Lankan parentage. The play was gripping, funny and tragically moving, with not a single false note. Sen Gupta has deservedly won an award for it. The point here is that Sen Gupta didn’t treat them as ‘foreigners,’ or the ‘other’ and understood the inner workings of their plight. For her, they had the same humanity as herself and she cared about them. On the other hand, the TV series Indian Summers, which was scheduled for ten series, died an early death after only two. Set in Simla, during the British Raj, it entirely failed to convince with its Indian characters, particularly Aafrin, who had no eco-system of his own and whose character was undeveloped and erratic. I have no problem with the writer Paul Rutman, (white, male) writing the series, but his Indian characters should have had the same dramatic value and space as his English characters. The ‘Indian world’ should have been as fully realized as the ‘English world’. When discussing the series with friends, a young Asian woman concluded, ‘he didn’t care.’

I say to both Shriver and Abdel-Magied: it’s not about don’t do it, but how you do it.

Shriver complains that her new novel The Mandibles has been criticised as “being straight and white” and asserts “I wasn’t instinctively inclined to insert a transvestite or bisexual, with issues that might distract from my central subject matter of apocalyptic economics.” But what she does do, is have a ‘secondary’ character as she calls her, Luella, an African/American woman, who ends up having dementia, being incontinent and who has to be led around on a leash, by the white members of the family. When I read this description, my stomach clenched in protest and I’m not even from the U.S or African/American. Slavery’s ashes are not yet cold, its consequences are being played out on the streets of the States every day; as they are, at the time writing, in North Carolina, in her own home state. The dehumanisation is still raw and present. Shriver cannot pretend she doesn’t know what slavery was and the long shadow it casts. Shriver is offended at a reviewer calling the novel “racist.” She says she wanted a character who didn’t detract from her central subject, but that’s exactly what the characterisation of Luella does, because of the baggage it carries.

Writers make decisions about characters, motives, plots all the time. Revising, changing, adding, deleting are part and parcel of the writing process. In this particular instance Shriver had other choices open to her, which would have served her purpose just as well.

Cultural appropriation and identity politics have evolved for a reason, they shouldn’t be handcuffs on fiction writers, but equally fiction writers can’t pretend to be oblivious of history.

Identity Politics is a double edged sword and should be used with the utmost caution. I understand and endorse the need to be proud of one’s background, and the natural resistance to new forms of exploitation. However, identity is also the precious birth-right of the individual. In my view, the purest manifestation of identity comes from the ethical exercise of individual conscience.

Communities are notorious for insisting on conformity, enforcing group practices and values, and punishing those who rebel. Patriarchy, ‘Honour Killings,’ FGM (female genital mutilation) are community creations. Young people who join ISIS, are practicing an extreme version of identity politics, and surrendering their conscience.

The tension between individual conscience and community identity has been a running theme through human history, and has provided us with some of our most illuminating literature, such as Darkness at Noon by Arthur Koestler or the play Clarence Darrow by David W. Rintels. This arena where conscience and community clash, becomes the crucible for exploring and defining what our most important values and freedoms should be, and the meaning of justice, morality and conscience.

Cultural appropriation, identity politics and fiction all deal with ideas – ideas arise from life, history and human passions. The very stuff of fiction.

WHO IS APPROPRIATING WHAT?

** The idea of cultural appropriation has been around for many years, from people objecting to Madonna decorating herself with henna, to white actors ‘blacking-up.’ A reaction to the defaming and besmirching of culture, which empires and enslavers always practiced (and still do i.e. ISIS justifying the enslavement of Yazidi women). The rule seems to be this: the more brutal the oppression, the greater the need for justification – therefore more ruthless the cultural destruction. Necessitating decades of work for cultures to be reclaimed, a sense of the common self and dignity to be restored. Thus, cultural protectiveness and sensitivity is a natural swing of the pendulum, but should not be immune to examination, critique and progress.

*** Identity Politics, is about defining yourself in terms of a group, whether racial, religious, gender, transgender or other and its ‘unique otherness,’ ‘unique suffering,’ its inner abyss and truth, unknowable by any ‘outsider.’ The self and the group are one: values, lifestyles and beliefs are derived from the group and jealously protected. Representation by an ‘outsider’ is often seen as ‘trespass’ and judged to be exploitative or inevitably false.