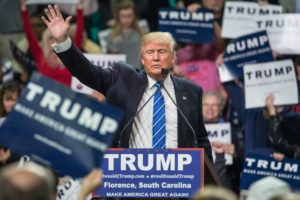 “Although it tends to get lost in the showbusiness of electioneering, politics is ultimately about governance.” (Professor Philip Bobbit writing about the rise of Donald Trump)

We’ve come to accept that politics is about dirty dealings behind closed doors, unsavoury bargains, and having to sell your soul. Apparently the Devil does brisk business in the corridors of power. And yet, the presumptive nomination of Donald Trump as the Republican candidate for president of the United States has left us shocked and astonished.

Making it imperative for us to look at ourselves and our part in his nomination. We may not have cast the actual votes, being neither members of the Republican party nor citizens of the United States, but we’ve contributed by believing there can’t be a better form of politics.

Politicians of every hue, are custodians of our past, present and future. This is the trust we place in them; part of the implicit remit we give them. Beneath the babble of policies, promises and fear-mongering, we make an unspoken contract with them: to guard our inheritance, whether manifested in buildings, ideas, values, or institutions; to protect our present, so our families, friends, and all others may be safe; to work for the future, so that lives can prosper, and advances can be made. Not only to work for the general good, but also the greater good. Indeed, we should expect them to work for peace, prosperity, health and happiness. For us, and the rest of the world.

We should raise the bar and demand a higher quality of governance; the greatest level of statesmanship, intelligence, maturity, and experience. It’s alarming to note, as Professor Bobbit does, that Donald Trump hasn’t served a single hour in public office, but has played the media with finesse. As the lyric in the musical Wicked puts it:

It’s all about popular!
It’s not about aptitude
It’s the way you’re viewed
So it’s very shrewd to be
Very very popular
Bobbit goes on to posit an illuminating idea: that the governance of the United States, and many developed states is poised at a historic moment: ‘… between the increasingly dysfunctional 20th century industrial nation state and the … inexorable emergence of a 21st century multicultural, pluralistic, devolved constitutional order.’

A multicultural, pluralistic 21st century? We just have to look at the diasporas across the globe, whether English, Asian, African or Chinese, and most recently the heartbreaking floods of refugees fleeing their war torn countries. If we are at a historic point, where we’re caught between the death throes of one world, and the birth pangs of a new one, the old politics will be stressed and distorted, unable to cope with either. It’s no longer able to service the old and hasn’t evolved to address the new.

An agitation exacerbated by the two party system, both in the UK and in the States. That system of two dogs constantly baying at each other, and going for each other’s throats at every opportunity.

In the UK a two party system which grew out of class division, at a critical point when the working classes were able to create a political challenge to the long-standing Conservative party. However, this adversarial system has definitely passed its use-by-date. In this age of Armageddon, where the world can be destroyed at the push of a button, we need a political system which has breadth, depth, and humanity. Containing a plurality of voices, backgrounds, experience and perspectives. Political tribalism no longer serves our needs.

We need governance created by politicians who have evolved beyond party lines, who are able to discuss, debate and negotiate with each other on the basis of respect, good faith and the needs of the country, rather than the needs of a party ideology. And who interact with the rest of the world on the same basis, aware that we are now within touching distance of each other, the degrees of separation have telescoped. Governance which exercises the gravest responsibility towards its nation and the world.

Borders are no longer a defence against the troubles of the world, the tragedies of others and the vengeful attacks of violence. It’s not an accident of nature that ISIS is rampaging across half the world and threatening the rest. What kind of politics gave it birth? The dirtiest politics of all. Let’s put an end to them, and demand the best from our politicians. After all, London has shown the way, rejecting the nasty smear tactics of Zac Goldsmith’s campaign and electing Sadiq Khan as mayor of London.

If the 20th century was about revolution and the end of empire, then the 21st century should be about democratic evolution and global connectivity.