‘Virginity tests!’ She exclaimed in horror at the other end of the line.

‘Oh yes,’ I asserted, ‘not just in Islamabad, Dhaka, Delhi, but Heathrow too.’

‘That’s outrageous. How come we’ve never heard about them?’

This conversation began when a younger member of the family rang me to ask about racist issues faced by the Asian community over the decades. She’d been asked to write a talk about racism in Britain for her work colleagues, in the wake of the Black Lives Matter movement. What emerged from our conversation was that a great part of British-Asian history hasn’t filtered down into contemporary society. To address this lack, in a very small way, as I’m no expert, this blog post is about some of the anti-racist campaigns of the 1970s and 80s. To add flavour, a short story, Sunni, which includes the ‘Southall riots’ of 1979, is attached at the end.

A notorious miscarriage of justice left four Sikh brothers in prison. On an ordinary day in 1977 Mohinder, Balvinder and Sukhvinder Virk were repairing their car, outside their home in East Ham, when five white youths, who’d been heavily drinking, started racially abusing and attacking them. The Virk brothers defended themselves, while the family made a frantic call to the police.

When the police arrived, it was the Virk brothers who were arrested, held without bail for two days, and convicted in court. The judge disallowed racism as a factor and in a travesty of justice, their attackers were the prosecution’s main witnesses.

A long and sustained campaign, supported by Asians at every level, managed to get their sentences reduced but not quashed.

January 1979. Heathrow: An Indian woman, a 35-year-old teacher, engaged to a British resident flies in; she’s looking forward to getting married and a new life in Britain. She’s not to know that in a little while, she’ll find herself forced to agree to an intimate examination by a male doctor, she will feel violated and abused, and she will become the woman who exposes the horrific practice of ‘virginity testing,’ perpetrated on women from the Indian sub-continent, igniting a huge diplomatic row, furious headlines in India and demonstrations outside the Home Office.

‘Virginity testing,’ had never been acknowledged by the British government, although it was also carried out in Islamabad, Dhaka, Delhi and Mumbai. This amazing woman, in the midst of her ordeal, had the presence of mind to secrete away a form, proving what was being done to her, and had been done to many other women. A practice later described as ‘tantamount to rape.’

Immigration rules at that time allowed fiancées to enter without having to get a visa, as long as they got married within three months of their arrival, whereas married women had go through the complicated process of getting a visa, before they could travel. British immigration officers applying their stereotyped ‘cultural knowledge’ of Asian society, had come up with the idea of virginity testing to sift the ‘real fiancées,’ from the ‘fraudulent’ fiancées.

The Australian legal academics, Marinella Marmo and Evan Smith have said ‘virginity testing’ was one of the gravest abuses of discretionary powers in British immigration history. In an article for Imperial and Global Forum Marmo and Smith give a broader background, arguing that it stems from colonial-era racist and sexist attitudes.

The Indian government hadn’t minced its words when it complained to the UN and said ‘virginity testing,’ seemed to “reflect prejudices dating back to the dark ages.”

The right that white power asserts over the bodies of brown women was reinforced only a couple of weeks ago, when the Evening Standard newspaper, reported on an American whistleblower’s allegations of improper gynecological procedures being carried out –  including allegations of mass hysterectomies being performed on vulnerable immigrant women – .  Dark age practices continue it seems.

The so-called ‘Southall Riots’ of 1979, were the manifestation of a younger generation of Asians rejecting the ‘keep quiet and tolerate,’ ethos of their elders. Mostly born in Britain, they refused to ignore racism and racist political groups such as the National Front. The murder of teenager Gurdip Singh Chaggar in 1976 in Southall, had propelled the formation of the Asian Youth Movement, with groups being formed in major cities.

In the election year of 1979 the National Front planned a provocative meeting in Southall. A night of mayhem ensued with mounted police officers targeting demonstrators, closing off streets, and using violence. This was the night Blair Peach was killed, having been hit on the head by a police officer. Helped into the home of a Punjabi family who called an ambulance, Blair Peach died a few hours later in hospital.

July 1981 The Bradford 12.  The rise of the right-wing continued, with the racist rhetoric trumpeting the same stories of immigrants taking away jobs and homes from white people; however young Asian people were politicising themselves.

“We were heavily influenced by left-wing politics and had very clear principles of anti-racism and anti-imperialism,” (Tariq) Mehmood says. “We really believed that Britain didn’t do us a favour by bringing us here – it exploited our poverty to bring us here, then it exploited our labour when we got here and then made us live in slave-like conditions.”

When right-wing groups planned a march through Bradford, Tariq Mehmood and 11 other young men, decided they couldn’t rely on the police to defend the community and made a stash of petrol bombs. The march failed to happen, but Tariq and the others were arrested and charged with terrorism. Supporters organized a campaign across the country. In court all 12 argued that they had a right to defend themselves against racists coming into their community.  All 12 were acquitted. The case of the Bradford 12 made legal history, enshrining self-defence into English law.

This BBC broadcast documents the case of the Bradford 12 and Asian Youth Movements in more detail: https://www.bbc.co.uk/programmes/b01dtkjb

1981 Uniform rules: Tarsem Singh Sandhu’s campaign to wear a turban at work is well documented, but the struggle of a young Sikh woman who won a victory for all female nurses, is not so well known. Those of us who’ve watched endless episodes of Call The Midwife, may not actually have noted the nurses’ uniform consists of a dress. Indeed it did, and as recently as 1981 was the prescribed uniform for a female nurse.

Tajwinder Kaur Sanghera, 19 years old at the time of her case, had been accepted onto to a nursing course, but didn’t want to wear a uniform which left her legs uncovered. Tajwinder suggested a compromise to the health authority (Kingston and Richmond Health Authority) offering to wear the dress uniform over trousers. Not only was her proposal rejected but the offer of a training place was also withdrawn. Tajwinder was not a young woman to accept defeat quietly and took her case to a tribunal, winning a judgment in her favour. All was not plain sailing as the health authority challenged the decision, overturning the judgment. It seemed all was lost. Surprisingly, in an astonishing turn-around, the health authority changed its uniform policy. Propelling a dramatic change across all NHS hospitals, finally allowing female nurses to wear trousers and opening up the profession to those women who may previously have been deterred by the uniform rules. This story has an even happier ending as Kingston and Richmond Health Authority renewed their offer of a training place to Tajwinder, who was happy to accept. So these days, when you go into a hospital and see nurses efficiently dressed in trousers and tunics, you’ll know who engendered that monumental change.

This was a remarkable case in which schoolchildren fought against racists, were targeted by the police, ended up in court, and were supported by hundreds of other schoolchildren who campaigned and picketed the court during the trial. The story is best narrated by the children who were involved at the time. The extracts are taken from journeytojustice.org.uk

In the same borough of Newham, where the Virk brothers were attacked, Goga Khan, who was at Little Ilford School, describes what happened at his school in September 1982:

About five or six older guys came through the gate. They just started hitting a couple of my friends that was standing near the gate, punching, kicking them, shouting racist abuse. So as one of them comes to hit me, I’ve hit him back and everyone’s started to fight. The teacher broke it up. Later I was in my Maths class and the deputy head and two policemen walked in. They put me in the back of a police car and they’ve taken me to Forest Gate police station and locked me up in a cell.

Goga was released, but the following week rumours flew around the school that friends of the man Goga had hit, were coming back to kill him. On 24thSeptember 1982 Goga says:

The younger kids said ‘we’re scared to go home.’ So [I and some other guys] said ‘OK, let’s walk around in a group and whoever lives where can just slip off as you’re getting near to your house.’

A car screeched up and three guys jumped out with sticks and attacked two of my friends. Our reaction was these were the guys that said they was coming to kill me. Half of us run off and the few of us that stayed started fighting back. The next thing, a police dog van screeched up and they arrested eight of us and took us to Forest Gate police station.

‘You guys just beat up police officers, you’re in big trouble, you’re really going to go to prison’. That’s when we realised, these guys that attacked us, they was police officers!”

The Newham 8, as they came to be known, called on schoolchildren to support them:

“It wasn’t just a Little Ilford (School) thing. The girls from Plashet School helped us in the campaign, the kids from Langdon School, Trinity School. That’s what brought us together”. Goga Khan

“Me, my sisters and classmates discussed who would strike and not go to school for the magistrates court picket. I went absent and my parents got a letter from the Head, we all did. I was called in by the Year Head to be “spoken to”.  I was 15, and sitting exams that summer, so it was a “big deal”. I felt strongly any child has the right to go to school without fear or danger.”

When the case was heard at the Old Baileyin 1983, the Newham 8 were represented by leading human rights lawyers. Schoolchildren from several schools turned out every day to picket the court.

“You’d have 250 people outside with banners and placards and that. Because we was schoolkids and defending the other schoolkids.” Goga Khan

After a hard-fought trial, the court accepted the argument that the 8 young men had acted in self-defence. 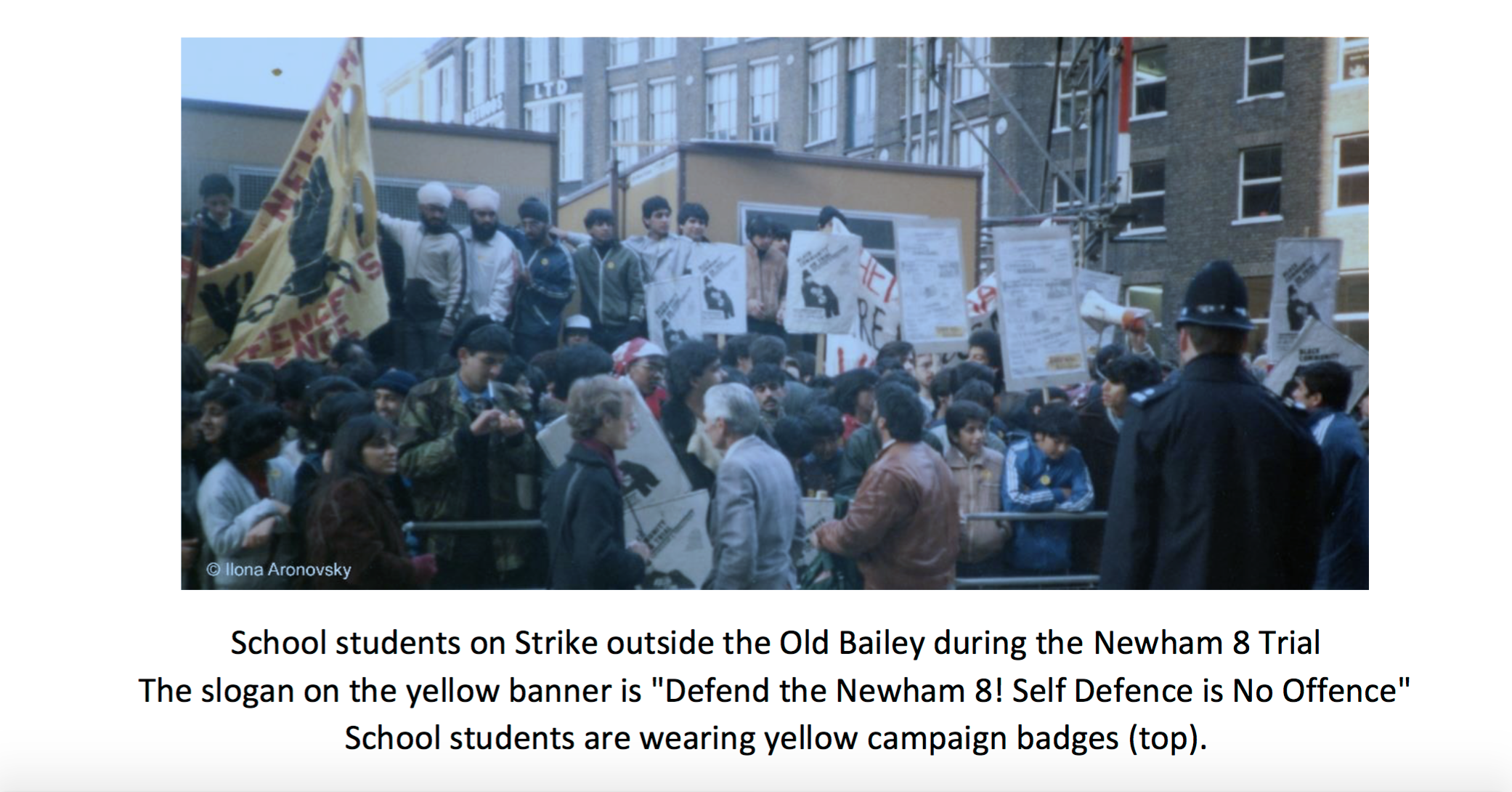 The following is a short story: 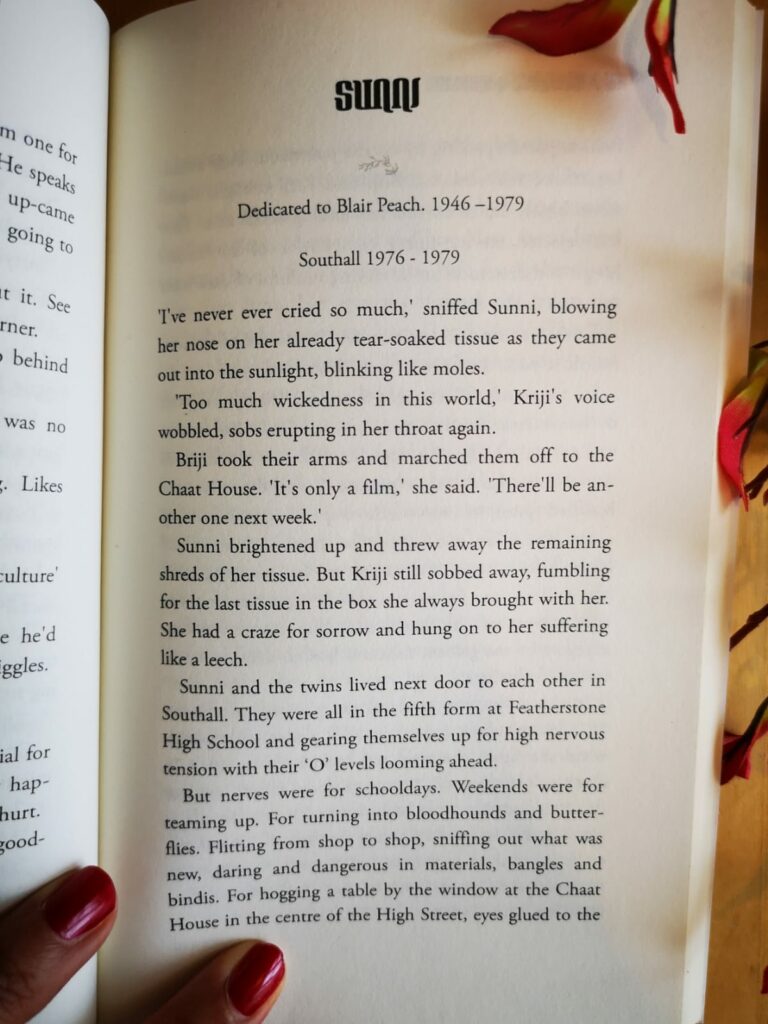 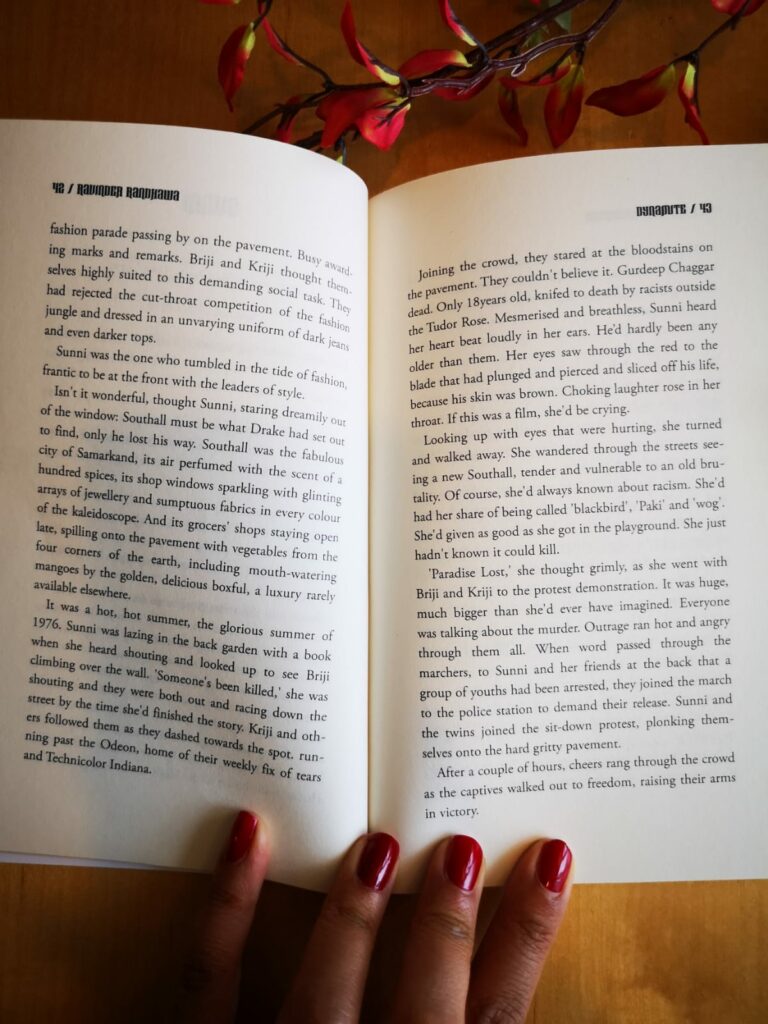 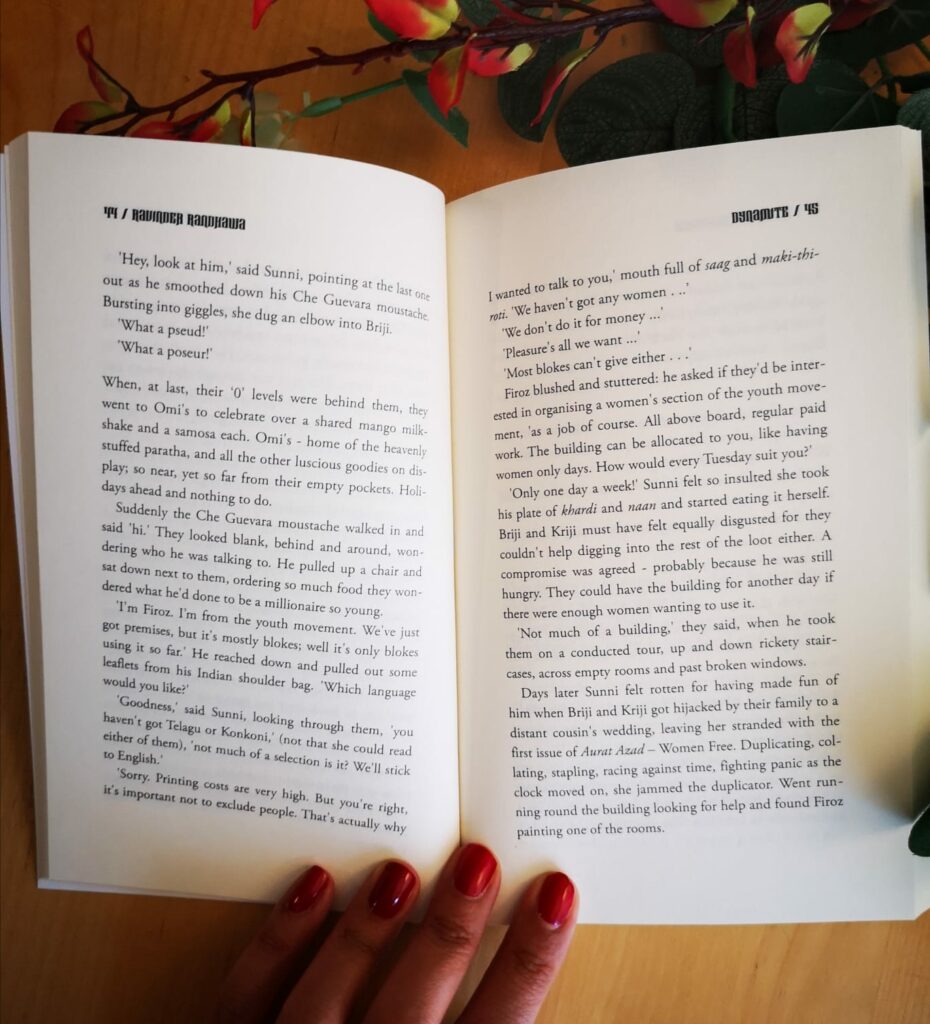 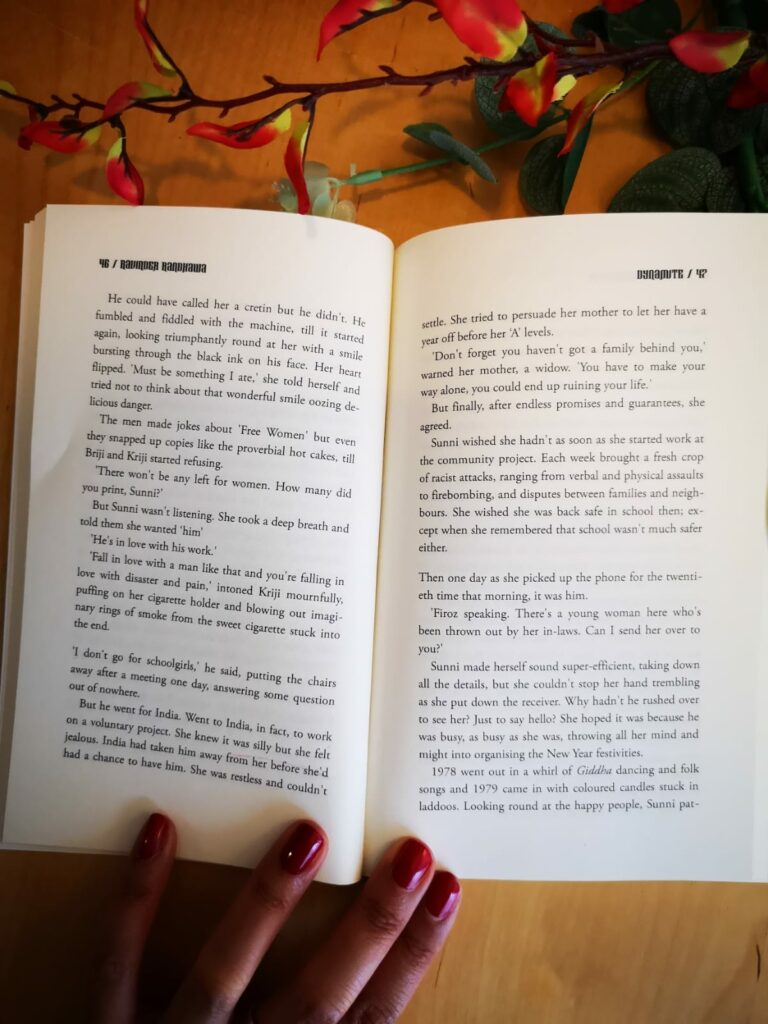 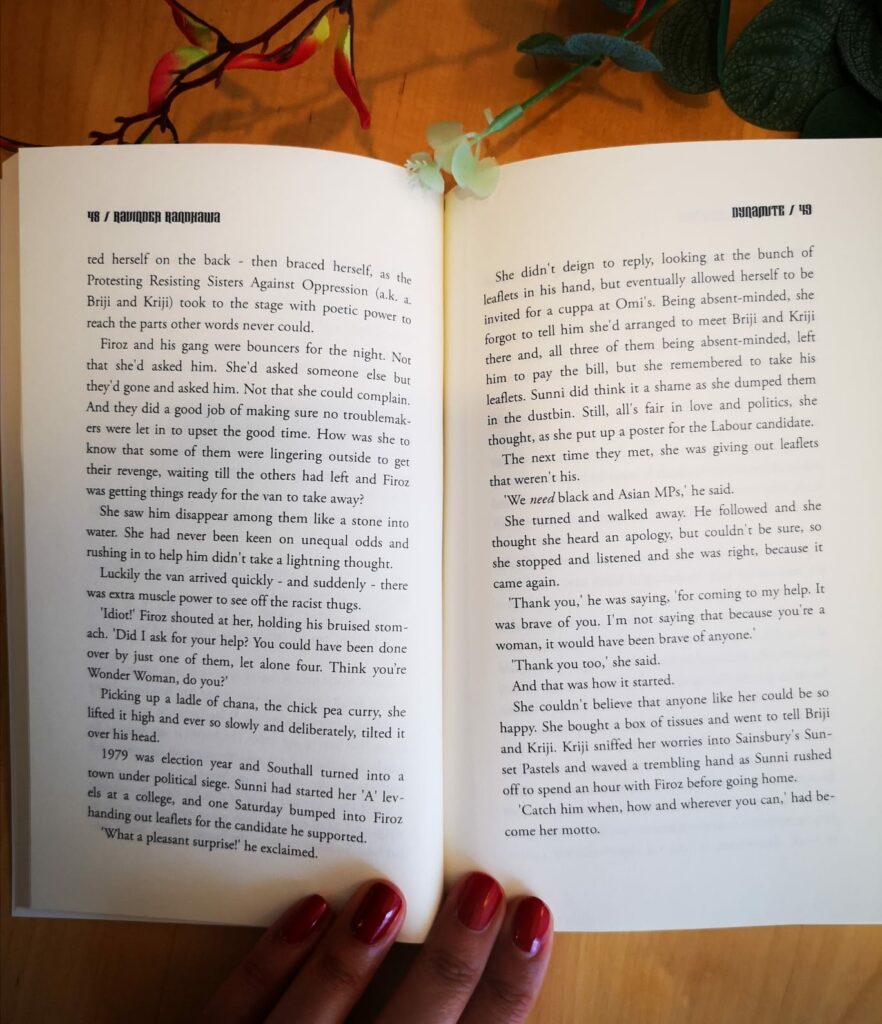 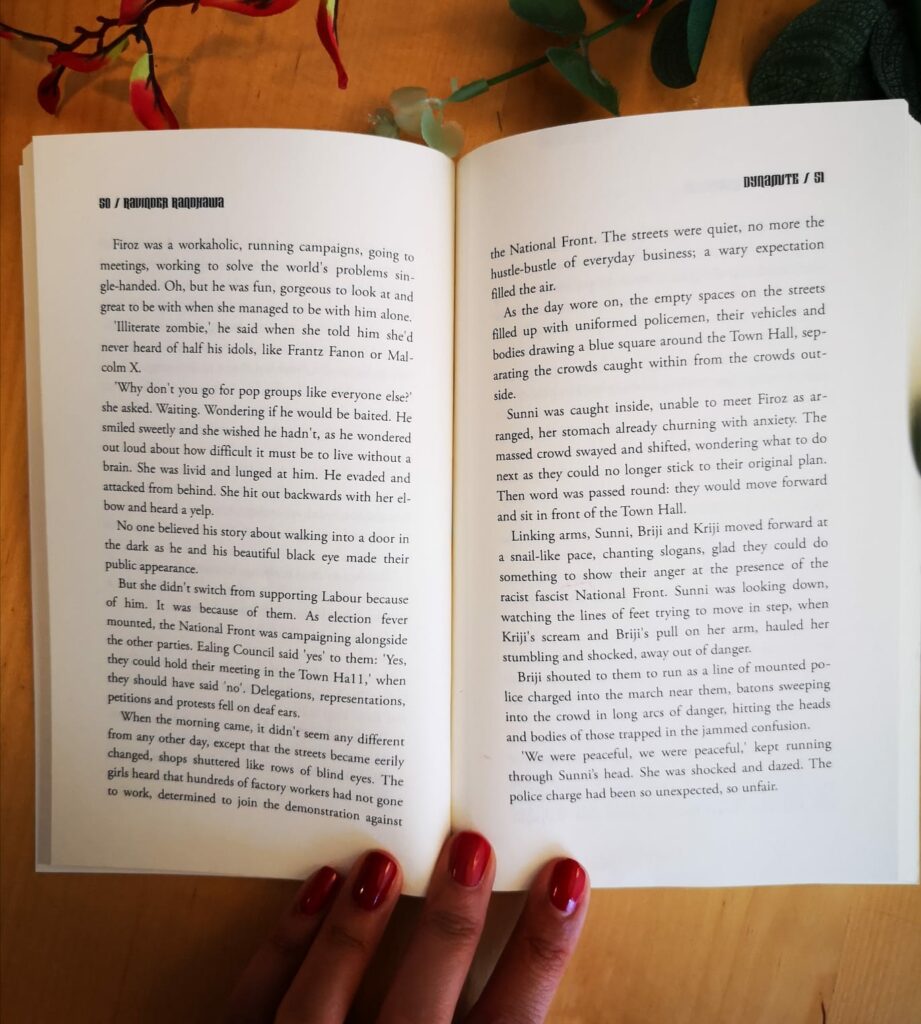 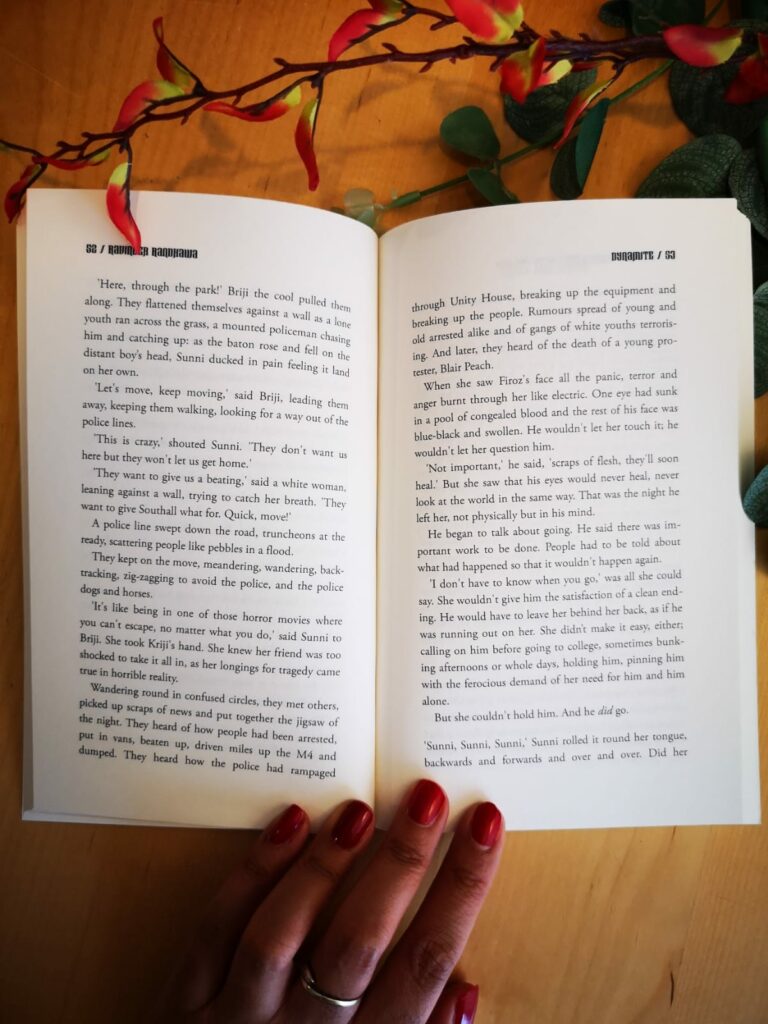 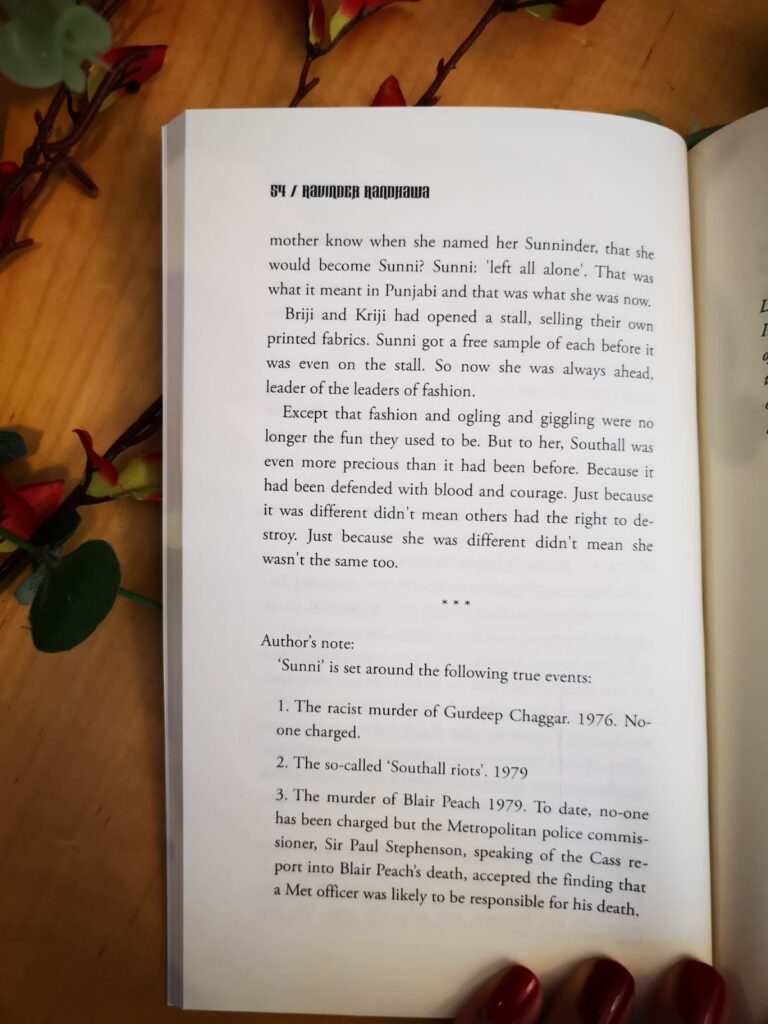