“No-one can take away your human rights,” asserts the photo montage by Kate Holt. Our birthright from life. But they can torture them, rape them, and murder them.

2018 is the 70thanniversary of the signing of The Universal Declaration of Human Rights.  The preamble to the Declaration begins thus: “Whereas recognition of the inherent dignity and of the equal and inalienable rights of all members of the human family is the foundation of freedom, justice and peace in the world,

Whereas disregard and contempt for human rights have resulted in barbarous acts which have outraged the conscience of mankind,…”

It’s the second point of the preamble, the ‘barbarous acts,’ which are addressed in the season of War Plays recently presented in rehearsed readings by Kali Theatre: ‘barbarous acts,’ perpetrated upon men and women in recent and on-going conflicts. Post WW2, post the Universal Declaration of Human Rights.

I don’t adhere to the ubiquitous acceptance of war and violence and their inevitability. As Article 1 of the Declaration states: “All human beings are born free and equal in dignity and rights. They are endowed with reason and conscience and should act towards one another in a spirit of brotherhood.”

Reason, conscience, imagination and will, have overturned empires and established moral standards. From the ending of colonialism, slavery and apartheid, to the campaigns for education for girls, workers’ rights and an end to the arms trade.

These four pillars of existence: reason, conscience, imagination and will, can define societies and personal lives. If we utilised their tremendous force in discourse and decision-making, our propensity to bang the war drum would be radically reduced, if not ended entirely.

When a certain Bishop Curry, at a certain wedding, exhorted us with all the verve and energy of a passionate idealist, to imagine ‘this tired old world when love is the way,’ he was echoing Article 1 of the Declaration “to act towards each other in a spirit of brotherhood.” Cynics may disdain ideals but cynicism is a barren philosophy with nothing to offer anyone. Ideals are the only hope against ambitious, often malignant politicians, the arms industry, and greed. 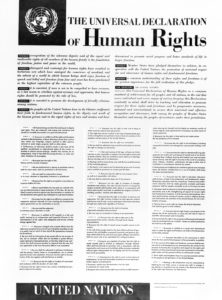 Helena Bell, Artistic Director of Kali set the vision for the War Plays: “I was deeply moved and struck by the incredibly progressive and egalitarian vision enshrined within the Declaration of Human Rights. Seventy years on, Kali marks the moment by exploring women’s stories within the war that triggered it and subsequent human rights transgressions in global conflicts.”

Rukhsana Ahmad, whose play From Kabul to Kunduz, kicked off Kali’s War Plays season says she wanted to communicate “The awful tragedy of war. I want them to know that behind the glory, behind the patriotism, behind the noble motives that each party claims, are all the darker, sadder truths, the conflicting interests of warring nations and state machineries, the lies and the losses. The deaths of young men, women and children, the devastation of cities, of homes and family life, often the loss of childhood and the youth of an entire generation add up to an unacceptable cost.”

A major theme in many of the plays is the brutality inflicted on women in war zones. It may be men who go marching to war, but it’s women who end up being raped and enslaved, held in sex camps or sold at auctions. As it has ever been, from ancient history to the present.

In Hecuba Birongona, the writer Sayan Kent takes the mythological story of Hecuba and translates it to the Bangladesh Liberation War, where a group of women have been imprisoned, raped and abused. The play lays bare the complex and horrifying reality. ‘…by writing about what happens to women in conflict is my way of keeping this issue in the public consciousness. Only by talking about these things can we come to some sort of resolution.’ (Sayan Kent)

My Homemade Kite by Nimmi Harasgama brings the story home. The main character, Krishnaveni, having been tortured and abused in the Sri Lankan conflict, has made it to England, where she still has to draw on her strength and hope. Based on interviews with victims of torture, the play hauntingly depicts her abduction, the brutality inflicted on her and her determination to survive.

Noor, not only brings the story home, but digs into British war-time history itself, to tell the extraordinary story of Princess Noor, who was deployed to occupied France where she worked as an undercover wireless operator for the British Special Operations Executive, till she was captured, repeatedly tortured and killed by a Nazi firing squad.

The three other plays in Kali’s season of seven War Plays were set in Afghanistan, Iraq and Tibet;  unfortunately I missed them due to time pressure.

Seventy years after the Universal Declaration of Human Rights the globe is still wracked by war and war-crimes against women: we only have to look at the atrocities in Myanmar as one example. I’ve often wondered about the relationship of art to war and violence; whether it merely preaches to the converted or whether art can actually change thoughts and attitudes: make a difference. “Art is an effort to create, beside the real world, a more humane world.” – Andre Maurois, FrenchAuthor .

From the book S: A Novel About the Balkans by Slavenka Drakulic to the painter Arpana Caur’s series The World Goes On about the Sikh genocide of 1984, art records, re-imagines, wrenches our hearts and ignites our reason and conscience. If mountains are built from sand grains, then I fully believe art’s importance in pushing us towards a more just and safer world.

Kali Theatre’s seven War Plays remind us of what happens, when we unleash the forces of war. The Universal Declaration of Human Rights, reminds us we have the tools to achieve a peaceful world.