These three truths are drummed into Asian kids: knowledge is valuable for its own sake, education is of paramount importance and teachers must always be respected.

Thousands of us in the British-Asian community (and mainstream society) have been shocked at the angry protests by mainly Muslim parents outside Parkfield and Anderton primary schools in Birmingham. Megaphones were used, little children placed on the picket line to shout slogans, people with no connection to the schools were mobilised, and terrible slurs made against some of the teachers. Sarah Hewitt-Clarkson, headteacher of Anderton school, who’s refused to buckle to the demands of the protesters has been called a paedophile and her professionalism slandered. Andrew Moffat, deputy head at Parkfield, who devised the No Outsiders programme to teach children about diversity and equality, including LGBT relationships, has received death threats.

Andrew Moffat has been awarded an MBE for his work and was the only UK finalist for the Global Teacher Prize by the Varkey Foundation.

The No Outsiders programme uses books which contains stories about different kinds of families. The books are purely about relationships. Such as one about a child having two mothers, another about a dog that doesn’t fit in, a third about two penguins that raise a chick together and so on. They’re chosen to be age appropriate and are used in thousands of schools across the country. 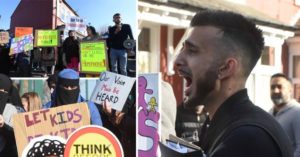 The Birmingham protesters are against children learning about LGBT relationships, claiming the lessons are ‘confusing children’, aren’t ‘age appropriate,’ and ‘are promoting homosexuality.’ The protesters constantly assert they’re not homophobic, but have publicly declared it’s ‘not ok to be gay in Islam,’ and the lessons go against their religious beliefs. A leaflet, encouraging other parents to set up pressure groups declares: “It is blatant discrimination against our ethos to promote a gay ethos in our schools.” Although a disclaimer at the bottom of the leaflet reads: “We do not condone any homophobic behaviour and believe all people be treated with respect.” Conservative religious groups of other faiths have been approached. WhatsApp groups have been set up to moblise people in the Muslim community, national protests are threatened when schools reopen in September, and the protesters have vowed to stop the equalities legislation becoming law in 2020. This all a far cry from ‘children are being confused,’ and ‘let kids be kids.’

In 2016, at one of the same schools, Parkfield, with the same teacher, Andrew Moffat, it was a very different story, with Muslim parents accepting children can be taught about gay rights and equality without undermining their religious beliefs. Last week parents, collecting their children before taking them to madrasas, the religious classes, spoke of their support. The school is “shedding light” on the minds of children, said one mother.

“If they don’t learn about gay, lesbian and transgender people in society from school they will learn it from the outside world and they could hear things like ‘that’s disgusting’. I don’t want that,” said another. “I agree,” said a third. “I’d rather my children hear it at school. When they are at home we teach them that in our culture gay is not allowed but we respect people who are different from us and hope they too will respect us and the boundaries of our religion.”

So what’s changed in the last three years? From the election of Trump to the Brexit vote in England, people who are divisive and intolerant have felt empowered and licensed. It’s not just the alt-white-right but all those who want to demean and persecute others. They’re all fighting for territory and power.

When authoritarians seek power they first come for the teachers, the educators, the writers. We’re seeing it in countries across the world right now, with the imprisonment of journalists, human rights lawyers and democracy campaigners.

As a British-Asian, a parent, and a person who has spiritual beliefs, I’ve been shocked by the Birmingham protesters. The personal attacks on teachers, the slurs and untruths, and the view that education and knowledge must be religiously controlled. Knowledge exists by virtue of its own logic, evidence, cause and effect. If our education system wasn’t based on evidential knowledge, reasoning, critical analysis, we wouldn’t have the scientific and technological breakthroughs we all enjoy, our medical field wouldn’t be as advanced as it is, and we wouldn’t have economic prosperity (currently threatened by Brexit ideology). Our society wouldn’t have the values of diversity, equality and progress, and our arts and culture wouldn’t be so vibrant and stimulating.

Education and the state must be secular. Naturally, schools should teach about religions, but not  religion itself or let their teaching be influenced by religious beliefs. That’s a job for the home and family. All people are equal in dignity and rights; all are entitled to the four freedoms: the freedom of speech and expression, the freedom to worship God in their own way, freedom from want, and freedom from fear.

If, in our dark, uncertain times, these protests succeed, I can imagine other subjects immediately coming under the hammer of religious ideology: evolution, science, the rule of law… . Shades of the Handmaid’s Tale threaten us.

Udham Singh and other Indian freedom fighters were driven by a sense of justice and equality. The protesters outside primary schools, who want to close off the minds of children, teach them discrimination and bigotry under the guise of religion are sowing seeds of hatred, that’ll grow and harm everyone.

I’m sharing this video which sent chills down my spine. I’m convinced this woman was influenced by the Birmingham protests, she even uses one of their slogans: “God created Adam and Eve, not Adam and Steve.’ It really is time for people of good conscience to exert themselves and oppose bigotry whether under the guise of religion, racism or some other sick idea of human hatred. The good news is, the woman in the video has been arrested and charged.