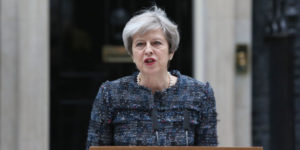 There’s a fine line between political principles and dogma, and an even finer line between party politics and party sabotage. A marriage of convenience may not always be palatable, but a sustained domestic fracas is never pretty and never inspires confidence.

June 8th is looming and dread sits in my heart. It seems that only a miracle will prevent a Tory landslide, and as we’ve seen in the last twelve months, the world is all out of miracles.

Even if every prediction is taken with a pinch of salt, a Tory majority seems to be on the cards. Teresa May is a seasoned political animal and she knew exactly what she was doing, when she called the snap general election. Like it or not, she’ll be staying put at 10 Downing Street.

I fear that by the end of the next Tory government, the NHS will be all but extinct and state education malnourished and barely breathing. Forget about a more equal society where education provides a staircase to aspiration – which it did do for people like me. I fear that business practices will be harsher and unfairer, and even more workers will struggle to put food on the table and keep a roof over their family’s head. To cap it all, a hard Brexit will weigh down on us like an avenging angel.

And perhaps even more worrying, I fear a sea-change will occur in people, for the worse. We’ll become harder, burying our goodness and kindness. Our hearts will become indifferent and callous as daily life becomes more of a struggle and our personal hopes wither away. We’ll smile less, laugh less, and be less inclined to be tolerant and charitable. In such circumstances we’re much more likely to vent our frustrations and anger on those who are different or weaker. Unhappiness will increase, and raise the levels of mental illness and family breakdown.

We need a game-changer. A new way of doing politics.

The left, in all it’s variety of politics across the spectrum, its disparate groups and hard-line elements, needs to come together, as never before. It needs to put aside differences, bury every hatchet and forget every feud, because, as someone once said, ‘The country needs you.’ Numbers create strength and united voices become a moral force. Combined brain power and strategies, can challenge the Tories every step of the way. Provide the alternative arguments, and let them know there’s a strong and determined opposition which holds them to account.

And in the process, change how politics are done in this country. Let go of the tribalism, of putting parties and groups before the urgent needs of the moment, before the practical realities of life. Defend the majority and safeguard the minorities.

The Tories may get their landslide on June 8th, but let it not be a defeat for democracy and who we are as people.

Democracy isn’t something that happens every five years: it’s the bedrock of dreams. A democracy leaves the door open, no matter how narrowly, for those who want to push it wider and pursue their right to well-being and a fair society.

By the next general election, I would love to see the emergence of a new political climate based on co-operation and progressive alliances. It’ll be the only way to re-build the country.