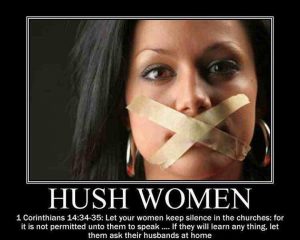 “It is we sinful women

It is we sinful women

who come out raising the banner of truth

up against barricades of lies on the highways

Extracts from ‘We Sinful Women’ By Kishwar Naheed.

Ah, we sinful women! If only Eve hadn’t picked the apple! If only we weren’t inferior, weak, impure! If only men hadn’t hi-jacked the Gods and made them into their own image?

If only we reclaimed our Gods – we’d reclaim the dignity and equality of half the world –  utilise its intelligence, goodness and strength – and change spiritual conversations forever. Increase the potential for peace and happiness for all.

And by doing so, tilt the balance against poverty and illiteracy, the abuse of women and girls, violence across the world. The destinies of millions and millions of women, have been shaped by the major religions of the world, such as Christianity, Islam, Hinduism and Judaism. Always to their detriment. Always demanding subservience and submission. Translating into the destiny of the world: for religious laws are made by men and implemented by men.

In a speech to the World Parliament of Religions, President Carter, hit the nail on the head:

“This view that the Almighty considers women to be inferior to men is not restricted to one religion or tradition. Its influence does not stop at the walls of the church, mosque, synagogue, or temple. Women are prevented from playing a full and equal role in many faiths, creating an environment in which violations against women are justified.”

“The truth is that male religious leaders have had – and still have – an option to interpret holy teachings either to exalt or subjugate women. They have, for their own selfish ends, overwhelmingly chosen the latter.

“Their continuing choice provides the foundation or justification for much of the pervasive persecution and abuse of women throughout the world. This is in clear violation not just of the Universal Declaration of Human Rights but also the teachings of Jesus Christ, the Apostle Paul, Moses and the prophets, Muhammad, and founders of other great religions.”

“The belief that women are inferior human beings in the eyes of God, gives excuses to the brutal husband who beats his wife, the soldier who rapes a woman, the employer who has a lower pay scale for women employees, or parents who decide to abort a female embryo.”

Women, it’s time to reclaim your Gods. Whichever God you may believe in. Challenge the versions of God which men have fashioned. Gods who are always male, who don’t appear to credit the natural laws of fairness, right and wrong, and the equality of men and women. Gods whose teachings, as administered by priests, preachers, imams and ministers, are so strangely out of accord with the eternal values of respect and justice.

Nigel Barber, in his 2012 article about why Religion Opposes Female Rights talks about the Vatican sending an all-male taskforce to the Leadership Conference of Women Religious.  “This organization of American nuns had been in conflict with the Vatican over issues related to women’s rights, including reproductive rights. The spectacle of an all-male task force being brought in to tell women what they must think may seem badly dated. Yet, male priests still tell most of the world’s women what to think and their message is often anti-feminist.”

I’m a spiritual person, so I’m not against belief. I agree with the writer Elif Shafak who said, during a talk at the Southbank Centre on 8th April 2017, ‘A life without faith is a life without magic.’ However, I am against religions which set themselves up as the only spiritual paths, where power is vested only in men, and where belief is demanded by threats of punishment, whether it’s ‘burning in hell’ or being labelled as a ‘heretic.’ Belief shouldn’t be based on fear.

Women: Reclaim your Gods, and take ownership of your souls. Usher in a new age for the planet. His Holiness, The Dalai Lama, who describes himself as a feminist, sums it up: “The aim of spiritual practice is to transform and perfect our motivation and mental disposition, so we can become better human beings.”

Women are half the world, ipso facto, women should be half the religious power in the world. We have a right to take ownership of our inner and outer lives. A right to be fully fledged citizens of our secular and spiritual worlds.

There’s no need for labyrinthian doctrines or esoteric theologies. Most of which disempower women and make them feel inadequate and unintelligent. Spirituality is simple, straightforward, and should be for the good of yourself and others. At the risk of over-quoting him, the Dalai Lama puts it succinctly: “There is no need for temples, no need for complicated philosophies. My brain and my heart are my temples; my philosophy is kindness.”

Women’s religious equality and independence has been suppressed by interpretations of scriptures, religious stories, and the claim of knowledge. Of Sacred Knowing. The stark truth is this: no-one knows.

No-one’s been to the other world, and returned. Not the grandly dressed bishops in the Vatican, the priests in their pulpits, or the imams in their mosques. No-one’s been, come back, and told us what it’s really like. No-one knows.

Women: Reclaim your Gods, and I suggest that not just religious power, but the secular power of women would shift in a quantum manner. Take ownership of your souls, and you could shift the power-balance of the world for the better: empower all women, tackle abuses and encourage economic equality.

The simple truth is, anyone can live a spiritual and ethical life without being subjugated by mountains of doctrine and theology. Women: Reclaim your Gods. For the sake of your daughters, and for the sake of the world.

“It is we sinful women

“who find stories of persecution piled on each threshold

who find that tongues which could speak have been severed.”

Postscript: since completing this post the brutal murder of student Mashal Khan, allegedly for ‘blasphemy,’ in Pakistan, by a frenzied mob has been reported. A photograph shows the mob consists of men. If women had equal spiritual power, I wonder if such atrocities would occur?