And in Britain, Parliament, the Mother of Parliaments itself, is being prorogued. In essence, being arbitrarily shut down for a significant number of days, just as the deadline for Brexit looms ever nearer. No matter what spin or gloss is put upon this unconstitutional act, the date of 31stOctober tells its own story. The Institute for Government writes: “Parliament has not been prorogued by a government as a means of circumventing parliamentary opposition to government policy since 1948.” Legal challenges are being mounted, huge demonstrations happening across the country and talk of civil disobedience circulating.

Tumultuous times, like an end of days scenario. After centuries of political and social development, how could it be we’ve reached this dangerous cliff-edge? Well, I have an idea. It’s rather old and has been around quite a while. I make no apologies for putting it forward again. It’s that thing called Dignity.

Most see it as an abstract concept, rather old-fashioned, nostalgia tinged. Noble, but quite impractical in a competitive, divided and hostile world. Nonetheless, there is something in the word, the sound, the meaning, we do consider important and valuable. Trump has been accused a million times of demeaning the dignity of the office he occupies. Recently, in a BBC programme, a politician also accused our newly appointed, blond-haired Boris Johnson of not being fit for the dignity of the office of Prime Minister of the United Kingdom.

So, why is dignity important? Particularly in government. What difference would it make if Trump had it in bucket loads and Boris Johnson manifested it along with his Etonian accent?

Dignity is important because it’s a foundation for trust; it’s also seen as a virtue based on justice, self-respect and respect for others. Intimating strength of character, so the person cannot be swayed or used by others; an inner discipline which controls the temptations of emotion and anger, can weigh short-term gain over long term loss, diligently work through contradictory information and competing demands. Above all, in government to recognise and exemplify the nature of a politician’s role: to  serve the best interests of the country; in good faith, to improve the conditions of its people; to support and accept the rule of law; and to be held accountable for all that it does.

After all, the safety of our families, our economic opportunities, our children’s education, our rights and liberties – ultimately our own dignity – depends on the decisions and policies of government. 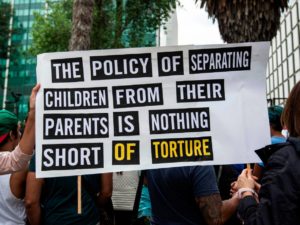 To see the barbarity of Trump imprisoning children, and that in vile and unhealthy conditions; denying climate change in the face of scientific evidence, is to see a person who’s unable to solve problems through reason, information and considered judgement. Someone who has no self-respect, therefore no respect for others, and thus no comprehension of his own or others’ dignity. A politician’s lack of dignity makes them blind to the obligations of their office, leading to a misuse of power, and affecting in lesser or greater ways, people’s day-to- day life, earnings and sense of stability; as well as coarsening a nation’s identity and goodness.

Boris Johnson is the product of England’s class system; educated at Eton, a goldfish bowl of the super-privileged. Fired from one of his first jobs at The Times newspaper for falsifying a quote, Boris Johnson is hardly known for his trustworthiness. Subsequently, getting a job through the ‘old boys network’ he landed up in Brussels as The Daily Telegraph’s correspondent; other journalists were of the view his articles often contained lies designed to discredit the European Commission;Chris Patten later stated that, at that time, (around the mid-1990s) Johnson was “one of the greatest exponents of fake journalism”.

Perhaps the most apt and damning indictment of Boris is by Nick Clegg, former leader of the Liberal Democrats, who described him as ‘Trump with a Thesaurus.’

The lack of dignity in a leader, manifests in the advisers they gather around themselves, who then infect and weaken long-established structures and processes, which have acted as safeguards. In the US the lies of Sean Spicer first undermined the institution and latter the demise of the daily press briefing. Mike McCurrysays: “It was sacrosanct that someone would stand up at the White House every day and answer questions as an essential part of American democracy.”

In Britain, Boris’s unelected adviser-in-chief, Dominic Cummings, nicknamed ‘The Prince of Darkness’, who’s already been found to be in contempt of Parliament for refusing to appear before a Select Committee, has now, with prorogation, proposed to shut down Parliament itself, to force through a No-Deal Brexit. Two legal challenges are due to be heard next week. However, the journalist Carole Cadwalladr, who exposed the Cambridge Analytica-Facebook scandal, and who knows the nature of the beast better than anyone, has this to say to people who think legal challenges will stop Boris and Cummings: “Please read my lips: Johnson & Cummings do not care. THEY WILL BREAK THE LAW TO WIN. And deal with consequences* later. They did it before. They will do it again.”

*There have been no consequences.

The burning of the Amazon forests is a graphic illustration of where our world is right now. There are tremendous wrongs and injustices in our societies, many of which we’ve inherited from previous generations and many which we’ve created. However, if we begin to posit dignity as a required element in our leaders, it could become a radical tool by which to choose them, hold them to account and judge them. And thereby progress our societies.